Water Under the Bridge And Over the Curb

So, last night Metro Council accepted the Mayor's hook-up fee raises on developers with the caveat of a "sunset clause," which will require that they reconsider the fees next year. I watched parts of the discussions during the Budget and Finance Committee meeting and the general Council deliberations themselves, and I grew tired of hearing over and over again how council members wanted to make sure that Nashvillians understood that they were not going to vote to raise fees for residents. Raised fees were going to get passed to some residents regardless, so any vote was a vote against the interests of the constituents to some degree last night. That's exactly why I said they stood to come out looking like saps.

But I had no idea just how sappy they would look until they took an extra bite out of the budget that is likely going to hurt some neighborhoods. Council members Jim Shulman and Ginger Hausser were able to amend the budget to extract the Mayor's proposal to eliminate discounts that customers with multiple water meters receive. Multiple water meters do not involve your garden variety single-family home. They involve the big companies and big universities around the area. So, continuing to discount Nashville's big operators means that those of us who live farther down the food chain are the ones who have to pay for the lucky breaks of the few at the top.

Oh, we may not have to pay more in the form of actual monthly payments to Metro Water. But the trade-off for us is that stormwater run-off projects will be put on hold to make up the loss that Shulman, Hausser et al. left in the Mayor's budget. So, those of us who live in neighborhoods that require solutions to our stormwater run-off problems--like the one in this picture of a Salemtown intersection--will lack the services we need. 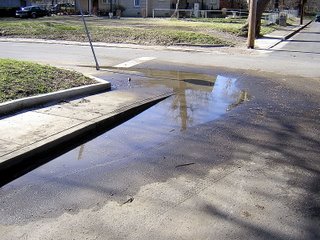 That may not seem like a huge problem now to Metro Council members, but it stands to daisy-chain to other problems, like the potential for property-damaging floods in torrential rains, increases in insurance premiums, the threat of mosquito-borne diseases spreading in neighborhoods where water is allowed to stand, and drops in property values in neighborhoods that have chronic stormwater run-off problems. Are those potential threats worth the risk so that Vanderbilt or Belmont are not inconvenienced by the loss of a discount they get for being large? I bet people who watch rivers run down their street and eat into their yards or seep into their basements for lack of adequate storm sewers don't think so.
Posted by S-townMike at 6/28/2006 11:50:00 PM