Thanks to Christian Grantham for forwarding these documents, which Vice Mayor Diane Neighbors supplied to the news media.

Without pause and as if she has a dog in the swift hunt, Vice Mayor Neighbors responds by scheduling a special meeting for the day after tomorrow: 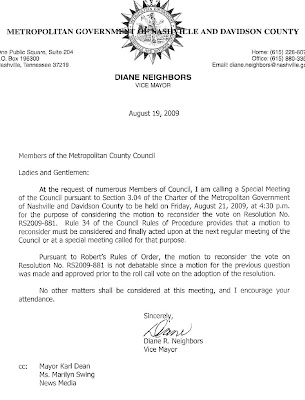 I can't say that I've ever seen Metro Council move with such cat-like and coordinated reflexes on a mayoral request. Makes me wonder how hungry Metro Council members are to have influence over and benefits from the construction of a convention center. Makes me wonder how corralled by the Mayor's Office the council is on this single issue. Makes me wish they were motived to operate with such coordinated efficiency on issues that benefit common people's real lives like parks, neighborhoods, schools, infrastructure, etc.
Posted by S-townMike at 8/19/2009 04:09:00 PM