What's in a name? Hopefully, some common sense.

First of all, a disclaimer: you don't have to refer to the neighborhoods just north of Downtown as the "North End." I have not been trying to start a movement or make history the past 5 years by using that term to describe the 5 or 6 neighborhoods bounded by the Cumberland River and I-65. If you choose to use it and get quizzical looks don't blame me for the head-scratches.

I've just been trying to use a name that is commonsensical. Nashville has a West End and an East End. Neither of those labels seem to fit, because neither west Nashville or east Nashville end. They spill out and sprawl like mighty rivers into seas of suburbs. Even the neighborhoods around West End Avenue and Hillsboro don't seem contained by I-440. There's no end in sight.

So why not have a North End, and why not a North End that actually ends? It cannot leap-frog I-65 into MetroCenter (except for maybe the Jones/Buena Vista neighborhood), and the Cumberland keeps East Germantown in. Moreover, it seems classically analogous to other noteworthy North Ends. Just because a couple of other folk here have not thought to suggest the name is no reason to dismiss it out of hand. Let's consider the geographic logic rather than go along.

Because you know what? Calling this area "Uptown" makes no geographic sense. It is a term foisted by market-minded developers looking for alluring bows to positively package their product without reference to reality. Historically, "uptowns" were those areas at the opposite end from "downtowns" with "midtowns" in between. Or "uptowns" were parts of towns where the street numbers rose (like "above 59th St." in Manhattan). By both of those definitions, Nashville's Uptown should not be in the north end of town, but in west Nashville.

So, if we're going to call the area we live in "Uptown," one of two things happens. One improbable scenario is that Nashville's Midtown moves to the Bicentennial Mall area (formerly "Sulphur Dell," now "The Market District," in hackneyed-haute fashion), and streets above Broadway should be numbered instead of named. A more likely scenario is that we acknowledge that we name communities now with no meaning or purpose, other than that which people contend over. To paraphrase political scientist Jean Bethke Elshtain communities are "floating signifiers." In that vein, you could call this area "Rural Free Delivery" and enough power and/or money could probably make it stick.

But I beg you, before you saddle this area with cold, bureaucratic jargon like "North Nashville urban core," please have some community meetings and get feedback. My sense is that many who live here would want something not so disenchanted. According to my latest Google search only a couple of people have even used "North Nashville urban core" at this writing. I would suggest a few charrettes are in order before that one gets coined at some expense to the rest of us. 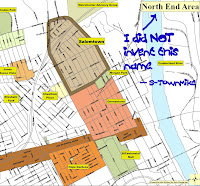 But if logic won't suffice and you truly require someone more "official" to legitimate the name "North End," look no further than Metro Planning. They used the term "North End" on one of their 2005 maps (look left). And I played no advisory role in that process (read my inset disclaimer). In fact, I liked their use of it, I thought it logical, and I simply followed suit. I wasn't expecting a field test for my choice. I don't control whether people read me or listen to me, and it really doesn't matter in the End. North Enders are going to call it whatever they want.
Posted by S-townMike at 8/04/2009 01:30:00 AM