Wastewater Wasting No Time On Construction, But Are They Wasting Our Time? 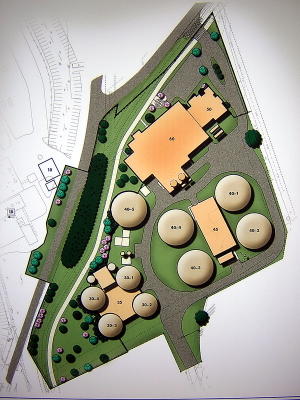 As not reported in any of today's mainstream print media, last night at the Neuhoff Complex about 40 people met to listen to and discuss the plans for Central Wastewater Treatment Plant. The footprint for the new campus appears in the picture at the right. 2nd Ave., North is the street running from the bottom to the top at the extreme left-hand side of the diagram. The Cumberland River would lie to the right of the picture, out of frame. The sidewalk running parallel to the right of 2nd Ave. is part of a new greenway to be installed connecting the greenway around MetroCenter to the North End. The managers of the project said that trees and other greenery will be planted along the new greenway. The various buildings around the campus will house the new biosolids process, which will include digestion and heat-drying. That process will convert toxic sludge--some days stinking up the neighborhood due to a current system that was suitable to the early 1950s, according to managers--to usable biosolids for fertilizer.

Managers told the attending residents of Germantown, East Germantown, and Salemtown that their committee had considered various options for a design based on the architecture of the neighborhood around the plant site. 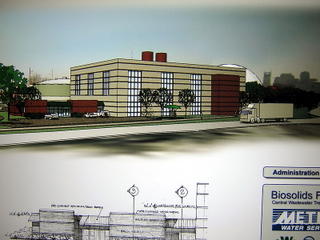 They decided to go with a brick structure for the main building on the campus that they said is consistent with the character of all three neighborhoods. When asked whether any actual neighbors from the North End served on the committee that picked the design, managers answered that one person from the North End was shown the plans, but that person did not have the power of suasion with the committee.

One long-time Germantown resident responded that he thought the building looked "like a prison." The pastor from a Salemtown church said he thought the building looked like the "top of a guitar," which he claimed would fit Nashville as "Music City." A couple of Salemtown residents told me afterwards that they were more concerned with stopping the odor problems than with architecture. Prominent North End developer, Skip Lawrence of Lawrence Bros. LLC, suggested that domed holding tanks be moved farther back behind the main building to enhance the neighborhoods' line-of-sight to the campus. 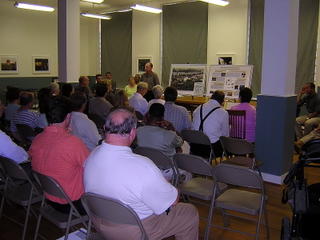 Neighbors seemed quite prepared to provide a parcel of input, and they even got into a tank paint color discussion at one point. One could hardly blame their enthusiasm, given that the managers billed one purpose of the event as getting feedback from the community on their designs. This meeting seemed to be the only opportunity we have for input, since there were no residents serving on their Sludge Solution Committee.

The construction timeline starts next month with demolition and loud pile-driving which will start before 8:00 in the morning and will end before suppertime. 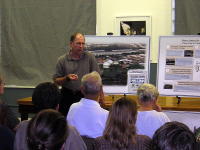 My overall impression was that the meeting was pretty much what I expected. I was pleased to hear that a greenway was going in, and the fact that it will be across the fenceline from the biosolids buildings indicates to me that the managers are confident that the odor problems will be solved. Aesthetics are important to me, but placid olfactory nerves are a higher priority in this case. I was also happy that the managers assured some of us Salemtown folk with water drainage problems at our storm sewers that those problems would be addressed.

I was unpleasantly surprised that the managers seemed defensive at times. My impression was that they were thrown off and put off by complaints they were fielding from residents about the odors and about previous promises to blunt the stink before the last major upgrade to the Central Plant. Did they not prepare themselves for critical feedback? At one point, one of the project managers commented rather cavalierly that the purpose of the plant is not to manufacture waste but to dispose of it. That came off as premeditatedly callous in all of its self-evidence to me.

As far as I can tell, Metro Water has not attempted to build a neighborly working arrangement with the enclaves at the North End. Skip Lawrence made what I considered to be the most significant and constructive recommendation to the managers when he suggested that they host a get-together or a cook-out for their neighbors for the simple purpose of letting them get to know the people of Metro Water. I agreed with him that it would go a long way to helping their public relations in our community. Brooking the stench would be easier than it currently is if I knew that I had face-to-face relationships with the people who work right next door on solving the problem. This meeting did not have to be as rocky as it was; but some neighbors obviously feel that Metro Water is not being a good neighbor.

My perception was reinforced by one of the managers who deftly dodged a question that I put to the meeting organizers. I simply asked whether it was true, as one Metro Water supervisor previously told me, that days after holidays would be the smelliest days since truck drivers, contracted to ship out sludge to landfills, did not work those days. I got a bureaucratic response that "atmospheric conditions"--which Metro Water does not control--were the primary cause of odor problems on certain days. I was not satisfied with that answer. After the meeting I cornered the guy to ask him whether the previous supervisor had simply pulled the holiday explanation out of his butt (I did leave the double-entendre out of my actual question). At that point, the manager conceded that indeed contracted truck drivers did not work on holidays and that we should expect stronger odors afterwards. He also let me know that the truck drivers do not work on weekends and that we should expect Mondays to be bad as well.

Yet, he could not bring himself to admit that in front of the group. So, I ask you: should we wonder why there are a few tensions between Metro Water and some residents in the North End?
Posted by S-townMike at 8/24/2005 02:15:00 PM