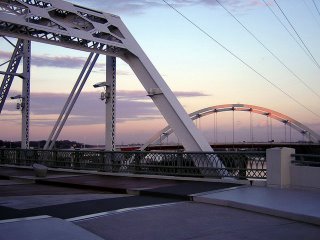 I have a couple of thoughts on reported moves in tomorrow night's Metro Council meeting to rename the Gateway Bridge (background of the picture above). First, it is good to see a conservative Council member like Eric Crafton, whom I would have suspected of signing Tennessee Tax Revolt's property-tax-referendum petition, making my past argument that we already have referendums, and they are called "Council elections." According to Crafton, "The input (members of the public) have is, they elected the 40 [Council members] that are serving to do these type of things." I do not oppose the idea that Council is able to make decisions on bridge names with input from their constituents in the traditional manner. Nonetheless, I hope that Council member Crafton would apply the very same logic to property tax hikes: the people make those decisions when they send certain leaders to the Council. If they do not ever want property tax raises, they will fill the Council with enough members to keep property taxes down.

It seems that Mr. Crafton's main interest tomorrow is in finding a new name for the Gateway Bridge that memorializes Korean War veterans. 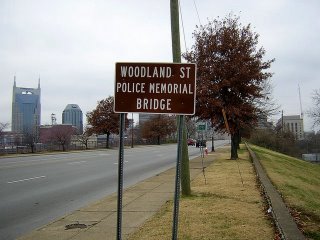 Crafton, who seemed to be a vociferous proponent of cutting the budget rather than raising revenues for services during last summer's budget debates, wants to spend money on a plaque to memorialize those veterans. What Crafton means by a "plaque" is unclear. The other bridge memorials to the police, to victory in World War II and to Civil Rights leader Kelly Miller Smith all have simple metal traffic signs that do not look very expensive. 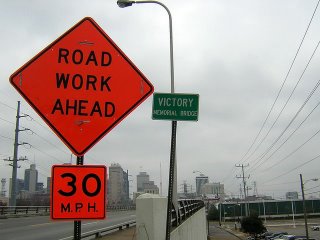 But when I think of "plaque," I think of something more in granite or bronze; I think of those heavy "historical marker" signs scattered about Nashville.

In keeping with Crafton's own expressed frugality during the past budget debates, I hope that the sign looks like all of the other bridge signs downtown. If he intends something more elaborate, then perhaps he should look for some corporate sponsors to foot the plaque bill, and perhaps share naming rights on the bridge: how about the "Nokia-Korean Veterans Memorial Bridge"? 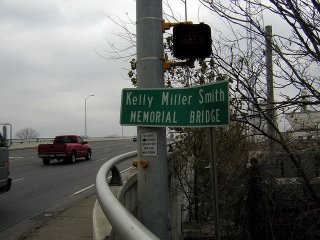 I do not mind renaming a bridge to honor veterans, but spending taxes for signage more decorative or elaborate than that of the other bridges is not a wise use of money.

However, Crafton's effort might be too little too late to change the name in the minds of Nashvillians. The name "Gateway Bridge" is stuck forever in my mind now. He should have started this name-change initiative before the bridge ever opened. Even then it might not have been enough. I do not ever hear the Woodland Street Bridge referred to as a police memorial. I also generally refer to the Jefferson Street bridge without mentioning Kelly Miller Smith. The Victory Memorial is just the Main Street Bridge to me. And the Korean Veterans originally had the Shelby Street Bridge named in their honor, but it did not stick to that structure. I think that Gateway is always just going to be "Gateway"; plaque or no plaque.
Posted by S-townMike at 12/05/2005 11:59:00 PM