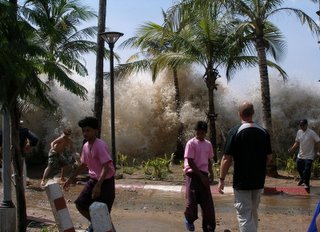 It is hard to believe that it has been almost a year since the "worst natural disaster in recorded history" devastated the landfalls of the Indian Ocean. I sat down with my family tonight and watched the Discovery Channel's special on the December 26, 2004 tsunami that struck places like Sri Lanka, Thailand, and Indonesia, killing over 225,000 souls and causing 50,000 to go missing. One of the most amazing stories I heard tonight was that whole aboriginal tribes on some remote islands survived the tsunami because of their local knowledge inherited from their ancestral traditions, which many of us moderns might call "superstition." One tribe believes that the earth and ocean are suspended and balanced in the branches of a tree. They think that disasters are imbalances caused by spirits swaying the branches. When they saw the tide mysteriously disappear minutes in front of the tsunami, they believed that evil spirits had pulled the ocean out of balance, and that the ocean would respond in anger by flooding the land. Whereas foreign tourists in all of their modern sensibility stood on resort sea shores in Thailand gawking at the disappearing tide, the aboriginals immediately fled to the highlands of their islands to escape what their ancestors warned them would come: giant, angry waves. We think we know so much.

I remember that one of my reasons for wanting to start my own weblog resulted from the frustration I felt with the lack of local television news coverage of the Indian Ocean disaster in the first few days following the event. Instead, during the first days afterwards, stations generally focused primary attention on the death of football player Reggie White and on a meeting of evangelical college students in Nashville, burying the story later in the newscast, even though stories covered at the international level had tens of thousands of people dead immediately. The local news editors did not seem as impressed as I was by early information that parts of Sumatra had disappeared into the Indian Ocean or that the earth's rotation was altered so that a day was shortened.

The tsunami underscored for me that the local mainstream media's priorities were out of wack. NewsChannel 5 was just about the worst. After dragging their feet to put the tragedy at the beginning of their newscasts, it took them longer to focus exclusively on what was happening in the Indian Ocean. Instead they ran with sideshow stories: one on Bill Frist, another on a local doctor's battle with "red tape" in attempting to go to the region to lend aid, and several on a local Baptist church collecting used shoes to dump on Indonesians. The first story was not much more than a briefing acting as a prelude to a possible presidential run with Frist showing up wherever attention was focused. No reporter bothered to ask whether the trip might be a media circus and distraction from actually addressing the needs of the tsunami victims. The real opportunity of the trip emerged in the Associated Press:

"Just before his helicopter lifted off [in post-tsunami Sri Lanka], Frist and aides took snapshots of each other near a pile of tsunami debris. 'Get some devastation in the back,' Frist told a photographer."

The second story on red-tape seemed to be sheer pandering to the anti-government crowd, because it seemed to suggest that a Nashville doctor had more problems with government red tape than tsunami victims do with tsunamis. Finally, while some may see merit in collecting other people's worn out shoes to send to destitute tsunami victims, I see it as another way of discarding our garbage and feeling better about ourselves at the same time. But the stories on the local Baptist church treated it as a noble effort, ignoring warnings from national news sources not to send used shoes, since southeast Asia is the center of international shoe production, and donations from shoe producers might render used shoe ministries moot.

Being a year removed from the tense days following the tsunami allows me to see that Enclave got off the ground in February partly because of what had occurred in December. I am still hearing tsunami stories that no one in the local press tells. If I could not rely on the local news media to feed me earth-shattering news from half-way around the world, then I suppose that I cannot count on them to report neighborhood-shaking news from right around the corner.
Posted by S-townMike at 12/18/2005 10:50:00 PM