Christmas Could Not Buy This Kind Of Publicity

As part of their ongoing service of sticking a finger in Mayor Bill Purcell's eye, Metro Council members gathered at Riverfront Park this morning fresh from Tuesday night's "Saving Christmas" resolution victory in order to have their own alternative tree ceremony. 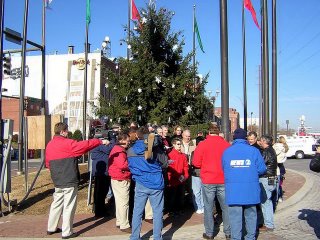 It's always good to see carolers at Christmas. This morning at about 10:10, Metro Council members positioned the mainstream TV news media and gathered to sing Christmas carols in front of the Holiday Christmas tree at Riverfront Park. 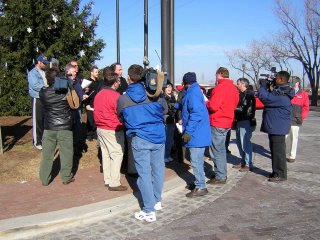 You can see how much media was there to cover a group of carolers downtown. They seemed to outnumber "the public," which today's Nashville City Paper reported would be there, too. I was a little surprised to see a lot of back-slapping and banter between the TV media, Council members, and conservative radio celebrity Steve Gill, who was one of the organizers of the little fleece party (Steve is in the red fleece). 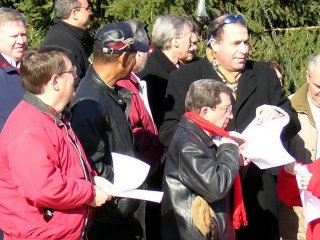 There seemed more Council members present than any other interest group. Here you see a few. My Council member, Ludye Wallace, is even there in the black hat. It's nice to see that Ludye has time to join his buddies for this Christmas variety show. He doesn't seem to be able to find time to attend neighborhood meetings of his own constituents or to answer the letters I send him regularly on various issues affecting the neighborhood. Is that Adam Dread with the burberry scarf? I wonder if he'll be attending church service on Christmas morning; I believe that all of the golf courses will be closed. 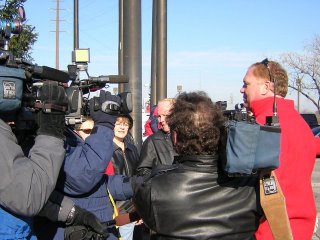 Steve Gill in his element: at the center of full, transfixed mainstream media attention. He usually ends up at the business end of a camera. 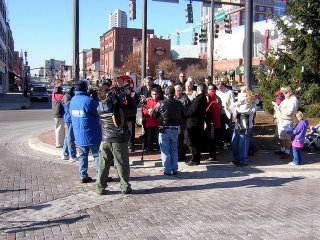 The group opened up with the song, "O Christmas Tree," which is more an homage to evergreens than a song about Jesus Christ. That does not seem to fit the whole "reason for the season" mantra. 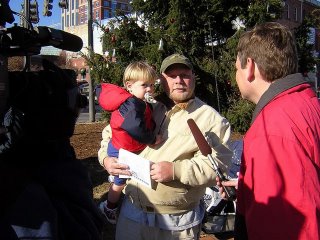