Dreaming Of A Pure Christmas 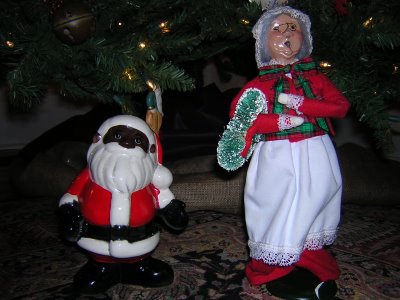 Black Santa and Mrs. Claus want to pass along their gratitude to the Metro Council members who overwhelmingly voice-voted to save Christmas in Nashville tonight because, as resolution co-sponsor Eric Crafton put it in his 9:45 speech in Council Chambers, "We aren't going to take it anymore." They nodded with approval when Crafton said, "I am tired .... of being held hostage to political correctness," and they didn't think that his comment was at all exaggeration, because they trust that Mr. Crafton has some firsthand knowledge of what literally being held hostage is like. They hissed and booed Vice Mayor Howard Gentry when he gaveled the Council to order after the other 21 resolution co-sponsors spontaneously gave Mr. Crafton an ovation after reading his prepared manuscript.

The couple's hearts are warmed that the Metro Council has secured traditional cultural purity in Nashville from the mongrelizing of Christmas by the rest of those uppity holidays. They won't tell anybody that the Council's resolution is non-binding; so, at least the perception that Christmas is saved still holds.
Posted by S-townMike at 12/20/2005 10:00:00 PM