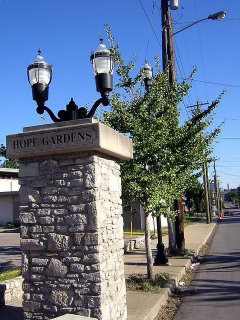 At the last Salemtown Citizen Advisory Committee meeting, the top two vote-getters in the contest between numerous neighborhood-enhancing projects were distinctive "identifying signs" (7 votes) and "entrance signs" (6 votes) for Salemtown (a similar distinctive sign from the Hope Gardens neighborhood is pictured to the left for reference). I was among those originally voting for such signs, because I believed that they would give the neighborhood greater definition, an attractive aesthetic, and they seemed to be something on which many committee members could agree.

With the recent rash of gang-related graffiti vandalism I have reconsidered my support for such signs. I am no longer willing to support the idea of putting any more landmarks up in Salemtown that would be vulnerable to such ugly vandalism. It is just not the right time to put signs up. Maybe at some future date when vandalism is the least of our worries, this would be a great idea.

For the time being, signs present more opportunities for crime and they do not provide any deterrent as far as I can see, unless they can be constructed with some kind of paint-proof surface. But constructing naked stone, brick, or concrete signage is an invitation to vandals, especially if it includes the word "Salemtown," which would be a source of pride for the local gang and a target for rival gangs. It is also not clear to me who would clean vandalized signs; if it would be a private matter, no one in Salemtown has a sandblaster, as far as I know. If we could not get Metro to remove graffiti, then a marred sign merely becomes a long-lived eyesore, undermining the very quality it was originally designed to enhance.

I welcome other residents' thoughts on the matter, but at the next meeting where we consider project priorities again, I am going to try to encourage other committee members to reconsider the sign project idea unless we can come up with something impervious to graffiti. This is too important a decision to get ruined by either our short-sightedness or the destructiveness of local hoodlums.
Posted by S-townMike at 1/28/2006 06:30:00 PM