As Mad as a Hatter: April 15th Tea Parties are Crazy on Astroturf 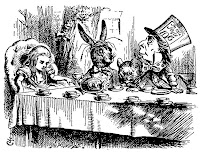 Paul Krugman cuts to the chase with extreme right-wing protesters airbrushing themselves on Wednesday into the middle Americans they are not:

there are the claims made at some recent tea-party events that Mr. Obama wasn’t born in America, which follow on earlier claims that he is a secret Muslim. Crazy stuff ....

Last but not least: it turns out that the tea parties don’t represent a spontaneous outpouring of public sentiment. They’re AstroTurf (fake grass roots) events, manufactured by the usual suspects. In particular, a key role is being played by FreedomWorks, an organization run by Richard Armey, the former House majority leader, and supported by the usual group of right-wing billionaires. And the parties are, of course, being promoted heavily by Fox News.

But that’s nothing new, and AstroTurf has worked well for Republicans in the past. The most notable example was the “spontaneous” riot back in 2000 — actually orchestrated by G.O.P. strategists — that shut down the presidential vote recount in Florida’s Miami-Dade County.

So what’s the implication of the fact that Republicans are refusing to grow up, the fact that they are still behaving the same way they did when history seemed to be on their side? I’d say that it’s good for Democrats, at least in the short run — but it’s bad for the country.

For now, the Obama administration gains a substantial advantage from the fact that it has no credible opposition, especially on economic policy, where the Republicans seem particularly clueless.