I was surprised to see this group of women coming up Rosa Parks ahead of everyone except for a couple of wheel chair athletes. I was less surprised that elite women might be leading the elite men than I was that they did not have the typical entourage of police and cameras on motorcycles that leaders usually get. 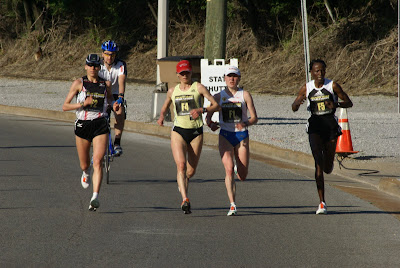 Then I found out that they were in the lead of the "Battle of the Sexes," after an 18-minute head start on the elite men, who ended up winning the battle at the end.

But the men's elite leader was already hot on the womens' heels after arriving at Bicentennial Mall after MetroCenter: 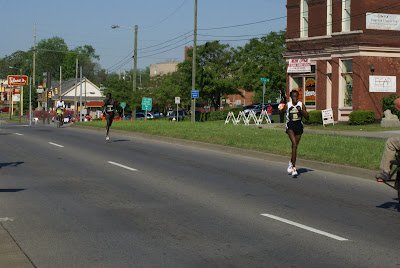 The eventual winner, Amos Matui, was not too far behind either. Five men eventually came across the finish line before the first woman marathoner. So much for the Battle of the Sexes.
Posted by S-townMike at 4/25/2009 04:25:00 PM