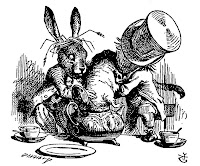 Did Tennessean reporter Colby Sledge even bother to look up the average attendance of protests at War Memorial Plaza in order to put a "several hundred" tea bagger turnout in perspective? Did he bother to anything beyond a Google search and a phone call to a tea party dude in Brentwood?

I'm surprised the Tennessean doesn't offer to give conservatives rides to the event given Sledge's puff headliner and the attendant details on how to keep up with the tea party.

This big freeze that Nashville's flagship newspaper is putting on an extreme minority of red-state interests who cannot possibly hand the GOP control in Washington would make Barney Fife and Fox News proud. But if the Tennessean wants to be associated with wacko claims about Barack Obama's citizenship and fidelity then they'll just have to take their lumps with the cast of right-wing characters attempting to leverage some free media publicity this afternoon.
Posted by S-townMike at 4/15/2009 07:50:00 AM