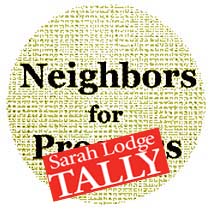 Remember how 35 members of Neighbors for Progress stood in a Metro Council public hearing last January and stipulated that their opinions of how redevelopment should occur at the Fairgrounds count for more than those of anyone else who lived farther away?

Well, it takes a lot of nerve for Colby Sledge and his gang to go outside of the Fairgrounds area to try and influence the re-election chances of a West Nashville CM simply because he did not agree with their opinions (or maybe they realize they can't beat the referendum and they're trying to pack the council with Deaniacs like Sarah Lodge Tally):


The group’s home is the council’s District 17, but a Neighbors for Progress-drafted mailer ... that arrived in the mailboxes of West Nashville District 24 residents reads as follows:

“Mayor Karl Dean had a plan to create a better quality of life in our neighborhood ... But Councilman Jason Holleman stood in the way.”

.... “we were dismayed to run into opposition led by your councilman, Jason Holleman.”

Holleman, who called the mailer a “mischaracterization,” said ...

“To my knowledge, it’s unprecedented for a neighborhood association or an entity that is based in one council district to get involved in another council race .... I’ve never seen that happen.”

Holleman is running for re-election against challenger attorney Sarah Lodge Tally, who has raised $50,000 in campaign cash and enjoys the support of some of Dean’s most well-connected supporters.

That "well-connected" referent is key. Neighbors for Progress continues to confirm to my mind that it is more astroturfed cover for the Mayor's Office and powerful political interests in state government than a broadly representative, community-based effort. Facing defeat via a popular referendum that will require a few more votes to bring Karl Dean's dream of selling off the Fairgrounds to wealthy developers closer to reality, they have must have decided to target other people's districts to shave off the votes that the referendum will require for leveling the Fairgrounds.

But the contradiction between the privileges they command for themselves in planning and privatizing redevelopment and the gall of trying to influence other neighborhoods' representation could not be more cynical or hypocritical.