Republicans and Democrats play political football with the Fairgrounds ballot 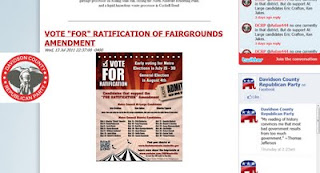 You knew this had to come. You cannot mobilize this many people to stop a Mayor's initiative dead in its tracks and leverage a referendum on the August ballot against that Mayor's wishes without a political party trying to co-opt the momentum for its own self-interests. This time it's the Davidson County Republicans, lead by CM Michael Craddock, trying to leech the momentum that the opponents of Dean redevelopment started.

Not only are the Republicans encouraging ratification of the Fairgrounds referendum, but they are using it as pretense to hawk council candidates friendlier to them than the CMs who robotically vote with Mayor Dean. It is a transparently cynical ploy that insults the intelligence of Nashville voters. Parties are parasites.

And some Davidson County Democrats are not missing a beat, labeling demolition opponents as Democrat opponents to stick it in the eye of critics of Dean, who has been christened the Democrat most likely to save the sinking party vessel.

Where the Republicans employ populism cynically, the Democrats turn their noses up at the unwashed masses. Democrats with some turf and much privilege (and those who defend them) throw around the term "class war" when the vassals and hayseeds get too uppity in their demands for a more democratic process to selling off public land in the name of trickle-down economic development. Case in point:

the fairgrounds long ago left being an argument about urban planning or private/public use of property, and has been supplanted by class warfare, especially in regards to the racetrack proponents. Here we have liberal elitist Karl Dean trying to swoop up good ol' working class folk land and turn it into some office park with $5 a cup coffee shops and maybe a used record store to boot.

Outside of detective and police crackdowns on labor movements a century ago, we do not have much experience with literal class war, so maybe throwing around the charge is easy. But if anyone outside of the flaccid and irrelevant Davidson County GOP is conducting a class war in this situation it is not those who support the Nashville Speedway serfs. Dean's critics have merely demanded that these planning issues be like other planning issues: open and informed by the community, all of the community beyond the power networks emanating from the Courthouse and the Nashville Chamber of Commerce. Setting up weak-minded Republicans in a scare tactic is just as cynical as the behavior of those Republicans themselves.

But the Mayor has treated the Fairgrounds as something different than a planning issue. It is widely acknowledged that selling off the Fairgrounds has been Finance Director Rich Riebeling's passion for years. And it was a mission supported heartily by Mayor Dean's previous Economic Development director, herself a Republican. To hive off the issue of class and the question of accessibility of Metro resources to working class people is the typical highbrow attempt to disqualify it. To impugn a mostly working class movement (yes, 3,000 people showing up to Metro Council and 11,000 referendum petition signatures qualify this as a movement) with the term "class war" is to render the class tensions of Nashville politics invisible. It is also an insult to regular citizens who are aware of the political forces that try and flip their energy into partisan power.

Republicans may want to stir the pot on these class tensions to leverage more capital GOTV now and later, but Democrats who try to deny the relevance of class to the Fairgrounds and with respect to the Mayor's oligarchic pursuit of the Riebeling's dreams are cynically attempting to divide and conquer votes, to keep people who may never be able to compete in the campaign finance lotto in their place.

I say, a pox on both their houses. I'll be voting for the Fairgrounds referendum to require a few more votes to tear anything down and to protect the community planning process. And the partisans can go to hell.
Posted by S-townMike at 7/18/2011 08:19:00 AM