Does Tygard Think Metro is Made of Money?

At next Tuesday's council meeting, Charlie Tygard will introduce a bill requesting that the Parks Department reimburse patrons of the TACA festival at Centennial Park who were towed after they parked on the grass because Parks "made no effort to warn patrons ... that parking on the grass was prohibited." Tygard, who counts himself among the council's fiscal conservative bloc, is essentially asking Parks to spend more taxpayer money on disaffected drivers. This is a memorializing resolution, so Parks is not bound to follow it if the council adopts it. 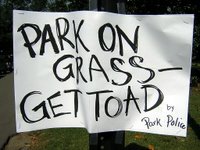 We didn't have any problems finding out that we could not park on the grass when we attended TACA (and to be honest, whenever I've parked on the grass for events in the past, I knew that I was taking a risk of getting towed, even as everyone else was doing it; but I accepted the risk). Parks did put signs up, so the charge that they made "no effort" is exaggerated. But if Metro gets in the habit of reimbursing people for ignorance of the laws, then I reserve my right to complain in the future when they do not notify me personally of any changes that cost me money.