The 3 Bridges the Planning Department Envisions for May Town Center

May Town Center developers have consistently argued without compromise that they only require a single bridge to handle high volume traffic to and from their "second Downtown" in Bells Bend. The Metro Planners have lent their support to the MTC blueprints, but under conditions that include 3 bridges.
That vision confirms opponents' prophecy that limited development inevitably expands beyond initial limits to include greater spread over undeveloped green areas. Why? Because developer-driven growth is by definition acquisitive until all resources are exhausted. Once growth is allowed to cross the natural barriers that separate the Bend from the rest of us, you could stop a swarm of locusts descending on crops more easily than barring future waves of developers from consuming increasingly accessible pasture lands.

In the case of MTC, one of the areas affected would include Bells Bend Park, a huge nature preserve that includes hiking and horse trails and overnight pedestrian campgrounds:

While the developer states that only one bridge will be needed, Planning staff has identified the need for a limited access bridge – for pedestrians, bicyclists, and transit – based on the recent independent review of the applicant’s Traffic Impact Study by RPM Transportation Consultants (RPM). This bridge is required and most likely will be located near the old Cleeces Ferry site. However, the details regarding a limited access bridge have not been finalized, and will require further discussion with Scottsboro/Bells Bend and Bordeaux-Whites Creek stakeholders.

During the planning process for the Scottsboro/Bells Bend Detailed Design Plan in 2007/2008, some stakeholders wanted to remove the bridge crossing the Cumberland River from the Metropolitan Planning Organization (MPOs) Long Range Transportation Plan (LRTP). This bridge project has been on the books since at least 1991, and its illustrative configuration goes through Bells Bend Park, which was created after the bridge was included in the LRTP. The bridge discussion grew increasingly complex when the developers of the proposed May Town Center began discussing possible bridge locations to accommodate their project. Planning staff discussed the issue of removing the bridge project from the LRTP with Public Works, and the decision was made to leave the bridge project in the LRTP as there will likely be a future need for it, even if the proposed May Town Center is not approved.

After further study, an additional full-access bridge may be needed in the area representative of the bridge included in the LRTP. If this third bridge is needed in the future, the presence of Bells Bend Park, the intent of conserving the rural character of Old Hickory Boulevard in Bells Bend, and the presence of environmentally sensitive natural features placed in Natural Conservation special policy need to be factored into its design in order to minimize any potential negative impacts.

Clearly, Metro Planning has ended the debate on whether more than one bridge will be needed. At the very least two bridges will be needed and developers and Metro agencies should act under presupposition that growth and swelling transit arteries will make a 3rd bridge probable. 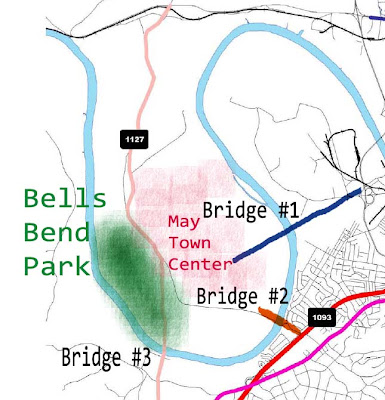 Bridges #2 and #3 will increase infrastructure costs for Metro Nashville. They will stress west Nashville neighborhoods, which would run the risk of becoming subsidiary "pass-through" areas rather than primary destinations of themselves. On the Bend side of the River, 3 bridges would effectively subdivide the Bells Bend community, which currently has a tiny, tucked, and little-used farm road in and out. Bridge #3 would certainly dissect one of Metro's own natural wonders, Bells Bend Park.
With the natural obstructions to development subsumed and overwhelmed, there would be nothing to stop developers, planners, council members, and a university from reversing themselves and compromising on present lip-service patronage to "aggressive" conservation. The bridges would tip the scales of environmental balance toward consuming growth.
The only way that Bells Bend's unique qualities can be preserved is by refusing to cross over to this multi-bridge vision that Metro Planning would have us blindly and uncritically follow.
Posted by S-townMike at 6/15/2009 11:53:00 PM