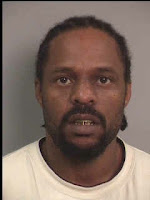 Darren Lamont Hardemon--a suspect in 7-week burglary spree last winter in Salemtown and a strong suspect because of evidence left in 9 recent burglaries in the other North End neighborhoods of Germantown, Hope Gardens, and Historic Buena Vista--makes two court appearances beginning at 9:00 tomorrow morning. According to the constant buzz on Hardemon on the Salemtown e-mail list, residents have been in regular contact with both Metro Police and the District Attorney's office and plan to be in attendance at 9:00; they have been also trying to follow up with some of Hardemon's suspected victims, since testimony from victims can have greater impact on sentencing.
A couple of days ago MSNBC picked up and publicized nationally a WSMV story about Hardemon's latest arrest in which police found him hiding in a refrigerator. He was already on probation for another burglary. On Christmas Day 2008 he had been released from jail on for the miserable sum of $1000. Since then he had been arrested a second time and bonded out again before being found in the fridge.
After past bondings, he reportedly lived with his mother in MDHA administered housing on Delta Avenue, in spite of his lengthy criminal rap sheet stretching back to 2000 (which you can find here). According to affidavits, Hardemon was arrested at his mother's house for several past crimes.
Here are examples of Hardemon's probable cause of recent North End crimes from affidavits:

On 6/3/09 between the hours of 0930 and 1600hrs, victim's home was broke into. Entry was made through window of victim's residence, which was shattered. A flat screen LCD television was stolen from home. Defendant was arrested on 6/19/09 for other burglaries that occurred near victim's residence. Defendant was marandized. Det Mavity and Det Fisher drove defendant around the Germantown area and he pointed out homes he had burglarized. He pointed out victim's residence and gave detailed information on how and when he broke into house. He stated he took a flat screen television. Blood was left at scene. Defendant had a deep cut on his right hand, which was photographed.

If these police reports are accurate and the evidence true, Hardemon should be destined for a jail cell. However, some in Salemtown have been irked by a perceived slowness in the District Attorney's office. Jenni Leed, a newer, but very engaged Salemtowner wrote the following today to the DA's office:

After finding out that his arraignment was scheduled for May 20 (Criminal Court Clerk public case search), I wrote to the DA’s office on May 14, requesting that the prosecution pursue maximum sentencing to prevent this from happening again. Many of my neighbors did the same. My letter to the DA, with links to reports on the holiday break-ins, is here: http://enclave-nashville.blogspot.com/2009/05/dear-mr-district-attorney-remand.html

I did not receive a response to that letter, so I requested an update on May 21 - after the arraignment. Susan Niland of the DA’s office wrote back, and copied a letter that she sent in response to another neighbor’s inquiry....

To say that the residents of Salemtown and Germantown are infuriated by this recent turn of events is an understatement.

Also, MDHA should be evicting Hardemon’s mother, since he was living with her the last time he was arrested, and arrested there (living in the fridge…) last Friday. Upon his arrest in January, she was given the option to kick him out or face eviction because she is living in Section 8 housing. I’m sure he will move back in with her again when he gets out. Whatever, but Tennesseans should not be paying his rent or the rent of his mother, who let Hardemon live there while he continued to rob my neighbors.

The officers in Central Precinct are fantastic, and they are doing everything they can to keep us safe. No matter how great their effort, our police force will continue to fight a losing battle if the local justice system will not keep repeat offenders in jail.

Some in Salemtown are also peeved by the MSNBC/WSMV news that a Metro Juvenile Court Judge refused a police request to revoke a 17-year-old suspect's probation when they learned that he was under house arrest for an earlier incident. This is not the first time juvenile wing of the local justice system has let Salemtown residents down.
Monday night, a Salemtown neighborhood association officer attended the Mayor's Night Out at John Henry Hale Apartments and spoke with Mayor Karl Dean about the Hardemon case. She shared that exchange with the association e-mail list, noting that she tried to assure Mayor Dean that the "three strikes and your out" system that is supposed to be working here is failing here. She also conveyed to him that she found the MSNBC/WSMV story to be embarrassing. Those of you who have watched Mayor Dean closely since his 2007 campaign will remember that one of his campaign promises was to focus on cutting youth crime. The continuing rash of youth crime and the ability of suspects already on probation to walk free instead of being locked up sustain my October 2008 contention that Mayor Dean has not followed through on his campaign promise.
So, there are some heartfelt concerns here that Darren Lamont Hardemon will be back out on the streets terrorizing local neighborhoods as he seems to have in the past. However, there is a contingent of neighbors who not only communicate their concerns, but also intend to show up and start monitoring the sentencing process firsthand. Rather than live in fear as victims and potential victims, their intention is to organize and strategize and confront the system. For all of our sakes I hope the system responds favorably to them.
Posted by S-townMike at 6/24/2009 10:10:00 PM