In 2007 I sat on the MDHA selection committee that picked the landscape architect team from Ragan Smith, and I now rue my own judgment in rating them highly back then. When Ragan Smith made their pitch for the contract to the committee, they told us that they would charge no more than 10% for design and construction administration. We found out that, when the bill came in after their selection, they charged 13% for their services.

That was one of many painful surprises that the Salemtown citizen advisory committee, which made recommendations to Ragan Smith on neighborhood improvements, got last night when the MDHA community planner convened us to discuss concerns many of us had with a seeming lack of accountability. I have been asking MDHA for an income/expense vs. budget report for some time and they they gave us this minimal one last night (sans itemized expenses): 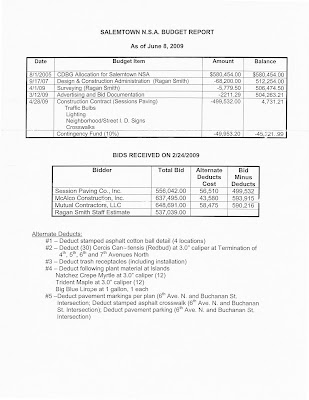 (click image to enlarge document)
What leaps out immediately to me on the form is that Ragan Smith's staff estimate of contractor bids on construction of the project (2nd table--$537,000) was way off the actual bids. When the neighborhood advisers met with the Ragan Smith leader of the project last January, he gave us a detailed, itemized budget list down to every street lamp and shrub neighborhood advisers recommended that was around $400,000.

When the CAC was asked last January to prioritize possible deductions (listed at the bottom of the document above) in case of cost overruns, the Ragan Smith leader seemed to downplay the chance of deductions, and so I did not feel the need to ask for some follow-up before contracts went out. However, because of Ragan Smith's estimate errors, significant parts of the project had to be deducted, and I regretted not demanding some follow-up.

The fact that Ragan Smith charged us more than they initially said they would to get the contract is like salt in the wound for me, given their underestimation of the bids that would come in and the cost of the project.

Plus, they made two other crucial errors in estimating costs. First, their electrical engineer miscalculated the cost of drilling for electric lines for street lamps, and they found out later that a more expensive technique will be required. Second, Ragan Smith did not calculate milling intersections into the construction costs of crosswalks; and then, either Public Works failed to tell them or Ragan Smith failed to discern that once they milled the intersections they would have to rebuild the sidewalk handicap access ramps.

As a result, 5 of the 6 of our proposed deductions had to be implemented, and Ragan Smith walked away with more money then they initially proposed taking. A friend who works for government told me last night that Ragan Smith should not have taken more than $60,000 from the block grant; that still would have been more than the 10% they sold themselves with.

And MDHA is not off the accountability hook either. Somewhere in the bowels of their administration building is a contract bureaucrat who negotiated the $68,000 agreement with the landscape architects. That person never met with us or talked to us about the bid/award process. Clearly they should have. Last night we asked the MDHA community planner to schedule a meeting with that person and our committee so that we can comprehend exactly what happened and why Ragan Smith cost our project so much more than they said it would (nearly $16,000 if you count the extra survey work they charged the grant for).

The MDHA community planner tried to get us to be more realistic last night about the bid process by pointing out that it is a free market and MDHA cannot do much about the unexpected overages. My response to her is: I acknowledge that the market determines the prices we pay. I also firmly believe in the spirit of a free market that we should broadcast our dissatisfaction with the profound disconnect between the product Ragan Smith initially marketed and the product that we actually received from them. Other potential buyers should beware when they go into the selection process with Metro government agencies (or anywhere else) that potential bidder Ragan Smith may not be the best choice in maximizing their resources.
Posted by S-townMike at 6/10/2009 07:59:00 AM