Salemtown's Fehr School: One of the "Most Protest Buffeted" Centers of Nashville Desegregation 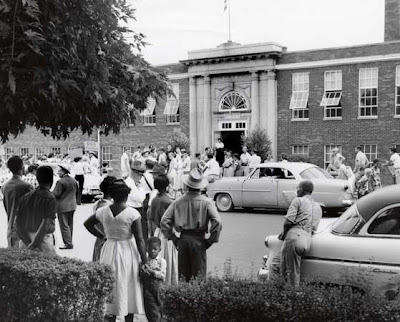 
One would hardly believe looking at the quiet Fehr School building in Salemtown today that it was one of the early centers of the Civil Rights Movement in Nashville, a city itself considered a cradle for the tectonic shifts of social change that erupted in the 1960s across the South. But in the late 1950s, Nashville joined Little Rock in the infamy of local segregationist resistance to the Supreme Court's Brown v. the Board of Education ruling declaring the separation of black and white public schools a violation of the Equal Protection Clause.

According to John Egerton, on a rainy night in September 1957, Salemtown's Fehr Elementary School building narrowly missed segregationist destruction after an infamous New Jersey white supremacist, John Kasper, whipped a mob up into a belligerent frenzy on the steps of the state capitol 2 miles to the south. In his narrative, Walking into History, Edgerton notes that a white mob of four or five hundred roamed Salemtown streets that night. They set structures owned by black families on 6th Avenue on fire and they lit crosses in their yards.

Nashville police moved into Salemtown to disperse the mobs and stop the violence, but the domestic terrorists moved elsewhere and spawned a rumor that Fehr would be blown up at midnight. The elementary at the corner of 5th and Garfield survived segregationist sacking, but across the river in east Nashville they dynamited Hattie Cotton School for the crime of letting one little black girl attend class earlier that day.

Today it seems beyond belief that so much hatred was reserved for the entirely fair notion that innocent African American 6-year-olds should start school in nearby classrooms with white 6-year-olds. Salemtown joined 5 other neighborhoods that day in the Nashville Plan to desegregate public schools. Across Nashville on September 9, 16 families dressed their 6th graders for the first day at new schools closer to their homes than their assigned segregated schools, and walked them through white mob hails of shouts and slurs--and sometimes rocks and bottles--into buildings like Fehr where public school officials welcomed them warmly. Tomorrow I'll tell the story of Salemtowners who marched down Garfield from 6th Av. so that their children could go to school at Fehr.

In September 1957, Salemtown was a largely white working class neighborhood with 18 black first graders zoned for Fehr. Only 4 showed up for class on September 9. That seems no surprise because, according to Egerton, whites were trolling streets in cars adorned with "KKK signs, Bible quotations, Confederate flags," and standing along sidewalks shouting abusive epithets at parents walking their children to school. Around half the white children zoned for Fehr stayed home, many boycotting in a first fit of "white flight." To add injury to the insults, a black custodian was assaulted by whites, who also slashed the tires on his car, when he attempted to take down the American flag at the end of the day.

When I launched Enclave I quoted Peter Taylor who wrote of the ghosts of Nashville past that they were "real and present somehow." Looking at the Fehr School building now, it is hard to see the ghosts of the contention and unrest of September 1957. But realizing that 6-year-old children were subjected to seething, bitter, and spitting hatred because they dared nothing more than going to school gives me pause. I wonder if malevolent energy still stains and stalks the pathways, but I also hope the good will and bravery of people who welcomed and witnessed integration of a higher form of community is around our corners and about the intersections, too.
Posted by S-townMike at 6/29/2009 05:05:00 PM