We Don't Even Get to Choose the Mountain: The Day a Salemtown School Desegregated 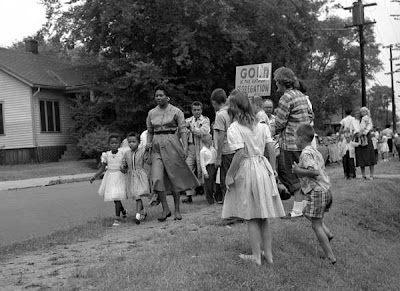 Mt. Juliet author-farmer Will Campbell (who also had the distinction of being the only white person present at the formation of the Southern Christian Leadership Conference) writes of an exchange with Nashville NAACP president Kelly Miller Smith regarding Smith's decision to send his 6-year-old daughter to all-white Emma Clemons School (12th Avenue South) in September 1957 under the Nashville Plan in spite of threats of violence to his family. When Campbell asked Smith about the danger to his daughter, Smith read the biblical account of the Hebrew patriarch Abraham who sensed that God told him to sacrifice his son on a mountain. Smith told Campbell, "You see, my brother, we don't even get to choose the mountain .... All we're asked to do is obey."

According to civil rights historian John Egerton, no one paid much attention to Clemons school the next day when Joy Smith walked the steps with her father to enroll because white opposition decided to focus harassment elsewhere. One of those chosen places was Fehr school in Salemtown. There a 21-year-old mother, her 6-year-old daughter, and 3 other African American children--supported by several witnesses--braved taunts and threats from a roving mob of segregationists besetting Salemtown. Kelly Miller Smith was spared the anguish this unseasoned mother was not as she waded through the loud torment and took the inestimable risk of defying the mob for the sake of her family's civil rights.

Twenty-one-year-old Grace McKinley and her daughter Linda lived with Mrs. McKinley’s parents and her invalid brother in a four-room house just around the corner and a block away from Fehr; the nearest all-black school, Elliott, was about a mile south, on Jefferson Street.

“I remember a lot about that morning,” said the mother ... fifty years later. “I heard they had better books at Fehr, and it was a lot closer than Elliott, and when they said Linda could go there, I made up my mind to do it ....

“I never was afraid to stand up for my rights. The day school started, I got Rita up, we got dressed, ate something. We must have been nervous. My mama said, ‘Don’t go down there with an attitude,’ and I didn’t, but my daddy was walking right behind me—to help me stay calm, I guess ....

When they turned the corner onto Garfield Street, a block from the school, they could see and hear the crowd: sign-waving demonstrators, police officers, curious neighbors (white and black), parents arriving with their children, school personnel, reporters and photographers—more than two hundred people in all .... [T]he protesters released a flood of epithets upon the mother and the two little girls; clutching their hands, she steered a path to the front door and entered ....

The fear on two little girls faces as they clung to one another and to Ms. McKinley while walking up Garfield is clear in the archival photos of the three. It doesn't look like the normal apprehension children have at starting a new school; that would have been enough for their little minds to bear. I see trepidation and dread on their faces: feelings that ought to be beyond the years of first graders.

Their parents were taking a great risk to go just around the block. It wasn't as if this 6th Avenue woman was a well-known leader whose prominence could have mitigated some of the risk of harm on Garfield that day. If something tragic would have happened to her and her first grader in 1957 it might not have figured as prominently as if it befell the NAACP president. But their pilgrimage to claim their equal rights on September 9, 1957 thrust them on a mountain that Grace McKinley did not choose in simply wanting access to a better neighborhood-based education.