From Morgan Park to River All on Greenway Sidewalks

It's been almost exactly a year since I updated the progress of the riverside greenway system adjacent to Salemtown.  So, tonight I struck out to see if I could walk our dog from Morgan Park down to the Cumberland River all on greenway sidewalk.  I was successful, because Metro has finally connected the Mo Park greenway spur to the Downtown connector greenway, which now snakes past the new wastewater treatment facility before it plunges down the riverbank to a hairpin turn with an unobstructed view of the Cumberland. In the past I've had to take 2nd Av N to Cement Plant Rd to get to the MetroCenter levee greenway; now it's a more pedestrian-friendly jaunt. 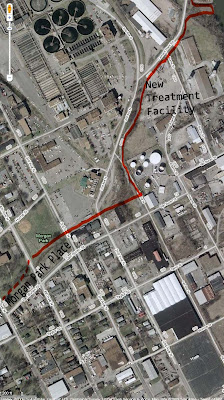 The best part of the walk was the absence of wastewater stench so common in the past when walking by the plant. It looks like the new facility is doing its work to eradicate the past smells that resulted from loading trucks with treated sludge in order to haul it to distant land fills. The only smell I could detect was that of the new cedar railings lining parts of the trail.

Most of the newly planted flora along the way is doing well. However the section between 3rd and 2nd had some young freshly planted trees that look dead, even with some patches of moisture underneath them as if the water had come too late to save them. I'll be disappointed if Metro doesn't either rescue or replace them.

I was also hoping to see some trash cans and poop bag dispensers along the trail. Fortunately, I was carrying my own bags for the dog, but I had to wait to get back to Germantown to use a public trash can. Metro should provide amenities to encourage dog owners to pick up and dispose of pet waste properly. The trails could also use some lights for those of us out at twilight.

Otherwise, Salemtown's still-in-process connector to the Cumberland River oozes potential to be a great asset for the community.
Posted by S-townMike at 6/08/2009 08:58:00 PM