I Don't Know What He's Yelling About

Weatherman Brick Tamland, of Anchorman: The Legend of Ron Burgundy fame, liked slacks and was known to exclaim, "I don't know what we're yelling about!! Loud noises!!" 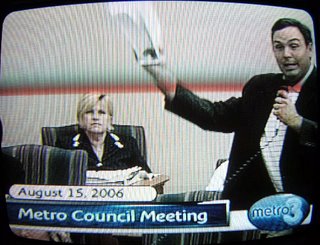 I don't know how important slacks are to Metro Council members, but there were loud noises emanating from my television set last night during televised debate on the bill to require departments to give the Council reports on how much paper they use. Most of the loud noises came from Eric Crafton, who was rather forcefully hollering that Metro government needs to start acting like a business with regard to counting paper. I concluded that he was sick of it when he roared, "I'm sick of it!!"

Without shouting myself, I would ask Mr. Crafton: so, you expect government to start acting like Home Depot, where the CEOs continue to make millions of dollars a year even when the company performs badly because of a "corrupt system of cronyism" within their board? Halliburton, Tyco, and Enron show us that businesses, especially when they buddy-up to government, are not commendable examples for reform. Table-pounding and righteous indignation won't convince me otherwise, and I don't know what all of the yelling's about.