Where the Streets Have No Lanes 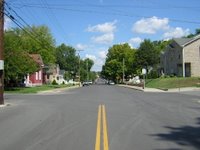 We seem to have a strong nominee for Enclave's 2006 Worst Rankings Of Metro Nashville Services To Neighborhoods. I just got the bureaucratic two-step from a Metro Public Works official.

Here's the background. At our last Salemtown Neighbors meeting, several members queried why Metro Water, after finishing their water-main upgrade and repavement of Salemtown and Germantown, didn't bother to finish the traffic markings in the road. The painters put down the double yellow through Germantown, but stopped at Salemtown, which looks odd and incomplete. So, I contacted Metro Water a couple of weeks ago, and after some delay they forwarded me to Public Works. Public Works, of course, had to do some research into how far the double yellow previously extended, even after I offered to send my own "before" pictures (you didn't think that I wouldn't have pictures of the old road, did you?).

I seized the opportunity to raise an old issue that I have about the high volume of children we have crossing at and playing around that intersection (which sits next to Morgan Park Community Center). I requested that they look into traffic calming possibilities and a crosswalk. Public Works found no records of a crosswalk before the repaving, so they wanted to send an inspector out to count children crossing. They also asked me when the highest volume of children crossed near the intersection. I told them it depended on whether school was in. During the fall and spring, naturally, after-school hours were the best time to inspect the intersection.

My answer did not seem to be good enough. Today I got a call from the dancing bureaucrat who wanted one specific hour--that's right, only one hour--that he could station his inspector. I replied that I had no idea which particular hour was best and that I could only give him a ballpark idea, which seemed to dissatify him.

He also gave a monologue of every reason why a crosswalk would not work at 5th and Hume, including:
I understand the concept of managing expectations, but I was beginning to wonder why Metro put crosswalks anywhere if this guy has anything to do with it. I finally resigned myself to believing that Public Works was just going through the motions on this one and generally just wasting my time. I finally told him to send an inspector out during any in-school hour, certify that no children were crossing the intersection, and simply get the chore out of the way, because that way he could confirm all of his preconceived notions and blow me off at once.

I ended the phone call, honestly thanking him for following up, and then I sat down and penned a complaint to the Mayor's Office of Neighborhoods and the Director of Engineering at Public Works. I'm not holding my breath waiting for Public Works to help with traffic here, but when they electric-slide on by I hope they show me the courtesy of not stepping on my toes again.