At the end of last Tuesday's Metro Council meeting, District 19's Ludye Wallace seemed visibly irritated at his fellows during their consideration of his bill to encourage the Metro Transit Authority to develop a plan to market its service to government employees. That bill was the last business item on the Council's agenda, and if you watch the tape (at 11:03), you'll see other members shuffling and storing their notes, rummaging under their desks, and pulling out their satchels in preparation for egress.

Ludye did not seem bent out of shape because of their rudeness in ignoring his pending bill, given any virtues to be found in conserving gas by marketing MTA. The reasons for his mood were apparently not so high-minded, given the transcript: 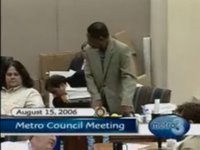 Chair: We have a move for approval [of the bill]. Is there a second? [Multiple audible seconds]. Discussion?

Wallace: I just want to say, I wish we wouldn't adjourn until there's an announcement made. [Cuts a look back at the Council members behind him and says something off microphone to one or more of them].

Gotto: Thank you, Vice Mayor Gentry. Councilman Wallace promised he wouldn't speak if the hour was getting late, but I want to commend him for this [bill]. I think that this is a really good idea and I do sign on as a co-sponsor. So, thank you, Councilman.

Chair: Thank you. Any other discussion? Seeing none, we're ready for the vote. All in favor say, "Aye." [A number of "ayes" audible]. Opposed? Motion is adopted. I would like to announce that the Pro Tem elections will be our next meeting, which is the 29th of this month.

Recall that Ludye is being groomed for the pro tem position; thus, the import of getting to the announcement. He basically turned attention away from the merits of his conservation bill in order to scold restless members for wanting to leave before the pro tem announcement.

And I am still trying to fathom the intentions behind Mr. Gotto's comments on the conservation bill. They seemed more of a back-handed compliment regarding Ludye's reputation for long-windedness than they did confidence in conservation. And I could not dismiss the possibility that he was protecting the-man-who-would-be-pro-tem from himself.

How deep does Ludye's commitment to promoting fuel conservation run? Not deep enough to deter shameless self-promotion that is also ironically out-of-order. As irritable as Ludye was at the shuffling around him, chiding his fellows for not waiting for the pro tem announcement was no less distracting and discourteous, given his personal interest in that announcement.
Posted by S-townMike at 8/21/2006 07:20:00 AM