The Westin Approval: Planning vs. Development 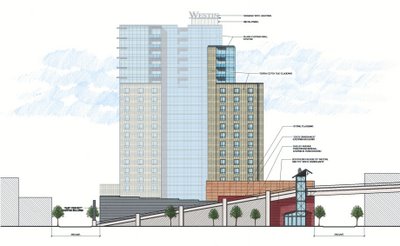 What makes Broadway special … is that it is not a theme park; it's a real place.

- - Metro Historical Commission Director Ann Roberts after voting against the Westin Hotel plans on Broadway
You have to admire Ms. Roberts for standing up to the misplaced rage of Council member Charlie Tygard and for weathering the development pressures of MDHA's design review committee for Lower Broadway while standing by her principles in the span of just a few days. It is not unusual in Nashville for development interests to oppose and to trump planning or historic issues, so yesterday's decision in favor of Westin's controversial development might be a practical defeat for Ms. Roberts' higher priorities, but surely it was not unanticipated.

Truth be told, we seem to be past "Broadway as a real place," with the disfiguration of historic buildings by entertainment establishments like the Wildhorse Saloon, and the now defunct Planet Hollywood and NASCAR Cafe. The market does not seem to demand the real place (and I restrain myself at this point from expounding the valid argument that the problem with the market is that it is morally relative: it can demand anything, constructive or destructive). Collectively, people seem to want a postmodern, Disneyworld-type façade that creates the mere appearance of reality. I share Ms. Roberts' commitments to historic preservation, but the reality of the situation is that people do not want reality unless it is in name only.

Nonetheless, the debate on this property has been churning for months on UrbanPlanet.org and on the Charrette. If you want to understand the complexities and details of the challenge, you should check out those discussions. The debate seems to cluster around tensions between scale vs. activation, between preservation vs. maximization, and finally, between planning vs. development.

As long as residents, developers, planners, architects, and businesses can strike a balance on design of these new buildings, we will be able to achieve the best form we can get. It is when any of the review boards of this project tip too strongly away from any interest group that Nashville will most likely be left with a liability on Lower Broad. But above all, any new development needs to stimulate the residential redevelopment of Downtown, which is just beginning. The last thing that we should do is that which would kill the residential reinvigoration of the Central Business District. That would be a step backwards.