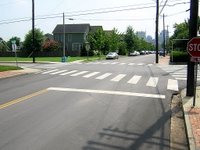 Thanks to HangingUpsideDown for reminding me that Germantown has a couple of crosswalks despite the fact that there are absolutely no schools in that neighborhood. The crosswalk in the picture is at the intersection of 5th Av. and Monroe St. That intersection was repaved after Germantown/Salemtown water main upgrade, and the crosswalk was replaced afterwards.

Despite the fact that Germantown can have its crosswalk put back after road construction without any semblance of a school around, I was told by a Metro Public Works official last Thursday that crosswalks are expensive and that they are generally put down only near schools. He was seemingly trying to talk me out of the idea of a crosswalk at the intersection of 5th and Hume St. at the Morgan Park Community Center.

Yet, no more than a block down 5th from Morgan Park is an institution that is closer to being a school than anything in Germantown: the Head Start Program of Nashville, which is the "largest provider of early childhood education in Davidson County." Head Start is even housed in the old "Fehr Public School" building. However, I was left with the distinct impression on Thursday that Salemtown crosswalks were out of the question even with children crossing busy roads.