The Bones of the Redevelopment Concepts

We're getting the predictable jaw-dropped, knee-jerk reactions in the mainstream media (MSM) this morning to last night's introduction of the Riverfront Redevelopment Plan. Lost in the MSM's sensation and preoccupation with what might be and with the cost of what might be are some very modest and practical initial stages or bones of the plan. 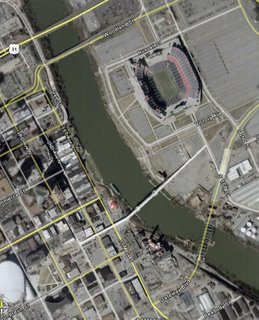 Those bones are no less newsworthy than the fleshed out concepts. Yet, they have gone largely ignored because the media is spellbound by "the island."

The preliminary stages of redevelopment include two transportation loops connecting the East Bank and Downtown. Much of the first is already in place. That loop is a pedestrian loop constituted by the Shelby Street Pedestrian Bridge, 1st Avenue, the Woodland Street Bridge and 2nd Street (east of LP Field). The major changes would involve creating wide pedestrian lanes on the Woodland St. Bridge (thus, cutting down on vehicular traffic).

The second loop would involve the creation of some form of mass transit line that runs along Gateway Boulevard to 3rd Avenue to the Woodland Street Bridge to 2nd Street. This line could be light rail or trolleys. Not only would this transit loop create a faster means of travel from the East Bank to Downtown, but it would utilize one of the Riverfront's primary assets: parking lot access. The design team found that most of the land around the Riverfront is devoted to parking lots. So, if some parking lots near LP Field give way to greenways or mixed-use neighborhoods, a transit line would still allow quick, convenient access to parking elsewhere.

The design team's longer-term expansion plans of the transit bones include extended transit loops to East Germantown (Neuhoff) and to Edgefield in a kind of "V" shape. The outer transit loops would be supplemented by a wedge-shaped greenway running from Neuhoff to the Cumberland River Greenway (Metro Center) and by a large Central Park running from LP Field to the Jefferson Street Bridge. Residential development would line the greenspace.

In all, I believe that these first-step concepts are significant for our development and worthy to be pursued, regardless of whether Nashville ever starts digging channels on the East Bank. The mass transit loop would be a boon to Downtown and East Nashville.
Posted by S-townMike at 8/25/2006 09:45:00 AM