Tonight's Riverfront Redevelopment Forum was well-attended and very informative. I'll post more details in the morning. For now, I am posting the two large-scale concept rendering options that the design came up with based on many factors, including last year's public feedback. Since they are large-scale, they do not account for redevelopment in the North End to the degree that they do on the East Bank. We were told that the North End would be more in focus at one of the future forums on small-scale redevelopment. 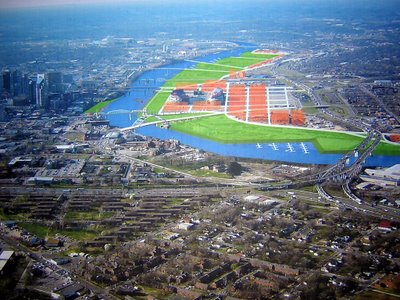 The first option assumes that the interstates as they currently stand will disappear or get scaled down to what The Plan of Nashville calls "urban boulevards." A good portion of the East Bank around LP Field would be devoted to green space (in green) and residential/mixed-use (in orange) with a street grid. A marina is suggested for the southern bend. 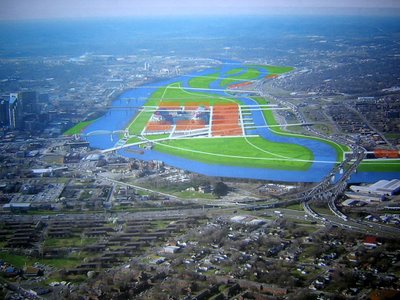 The second option assumes that the interstates stay. To create more room for marinas and landings where people can go to the water, a channel would be cut around the east side of LP Field. That would essentially create a 275-acre island in the river for green space and residential/mixed use. Future expansion also depicted would include digging more channels to create smaller islands that would not be accessible by car, but remain bird habitats and fishing spots (the channels would be stocked).

Keep in mind that these conceptual drawings depict both short-term and long-term (20 years) redevelopment. I have to say that I was pretty impressed with these plans. I think the second option is particularly intriguing.
Posted by S-townMike at 8/24/2006 09:50:00 PM