Neighbors Gather at Summit to Chart Their Future 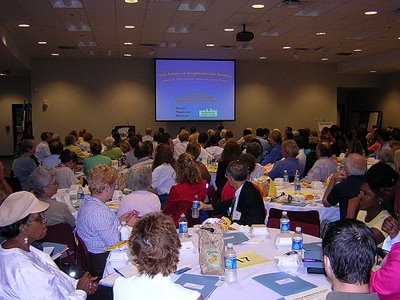 An estimated 250 neighborhood leaders from all across Davidson County gathered at the Adventure Science Center tonight to begin to chart a course for Nashville's neighborhoods before next year's local elections. Meeting organizers initially only expected 100 leaders to respond to their invitation to tonight's first in a series of strategy sessions, but they received 200 positive RSVPs. The crowd that gathered was standing room only and it spilled out into the Science Center's main lobby. Conspicuously absent was the mainstream TV media.

After listening to a brief presentation on the reasons for the gathering, leaders "broke out" into 16 small group "visioning sessions" to discuss what they liked about their neighborhoods and Nashville, what they would like to see improve the community, and what recommendations they had to make the community the best that it could be. Since groups came from all parts of the county, both urban and suburban priorities informed the visioning.

The turn-out was impressive, and I felt that this was a positive first step to bring the neighborhoods together to agree on a common strategy that can be used to hold candidates accountable next fall. The meeting itself could have been improved by finding space more conducive to small group acoustics. Several groups meeting in the main hall made listening to each other the challenge of the evening. 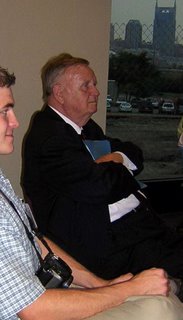 State Senator Doug Henry was recognized for his attendance and he was thanked for helping to pass the state bill that made recalling local Council members possible. I did not see his Republican opponent in the November election, Bob Krumm, in attendance. Perhaps neighborhood issues are not Bob's cup of tea, unless illegal immigration is involved.

If you did not attend tonight, then you--like Candidate Bob and the MSM--missed out on a significant community meeting that could help chart the course of Nashville's future.

09/01/2006, 12:50 p.m. Update: The local mainstream print media also failed this morning to cover this meeting, with the exception of the Nashville Post's online edition, which linked Enclave's coverage. Both the Tennessean and the Nashville City Paper get bad marks for coverage of significant neighborhood issues.
Posted by S-townMike at 8/31/2006 10:30:00 PM