News 2's first story tonight on the 10:00 broadcast was on the Williamson County Republican website's racist references to the Davidson County/Metro Nashville Kurdish community. It seems that WilliamsonTNGOP blamed every single Nashville Kurd for robberies and drug deals.

News 2 interviewed a Kurdish community leader outraged by the Republican Party's prejudice, and he said that they are working on a petition to send to the red county's GOP in protest. News 2 also credited unnamed blogs with breaking the story. Whenever WKRN posts a link or video, I'll pass it along. It is gratifying to see the media finally aiming its probes at smug Williamson County Republicans.

It would also be nice if the state head of the GOP stopped trying to defend Jesus (I'm sure he doesn't need her help) and motivated WilliamsonTNGOP to stop smearing Nashville's ethnic and immigrant communities. 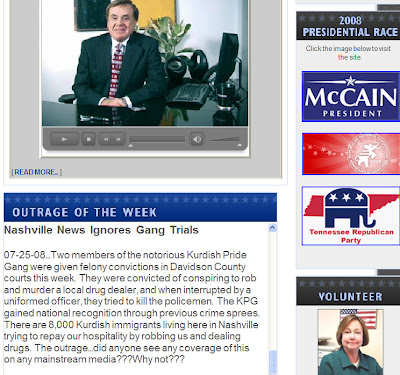