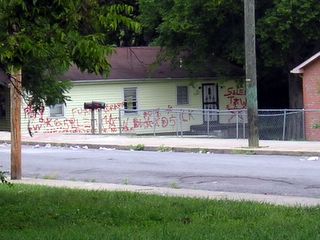 Gang-related graffiti reappeared on this house in the 1700 block of 6th Ave., North over the holiday weekend. There is also graffiti painted on the sidewalk, and trash litters the street. Photograph by S-townMike.

After a relatively long hiatus, gang-related graffiti has returned to Salemtown on a much smaller scale than during last winter. Properties near the corner of 6th Ave. and Garfield have been popular targets for vandals in the past.

As I reported almost four months ago, this house has been hit and cleaned once already. Fortunately, this was the only property hit in the vicinity. Businesses and houses hit last February and March were untouched as of this afternoon.

If the property owners of the house above procrastinate on removing the graffiti, the problem will only get worse, and it will bleed over the rest of us. Leaving graffiti only emboldens the boyz.
Posted by S-townMike at 7/06/2005 12:00:00 AM