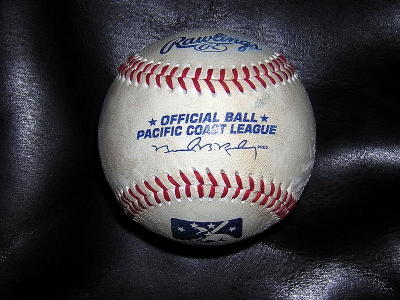 Last night we left the Sounds game early, after the first hitter in the bottom of the ninth was put out and the Sounds were five or six runs down. The inevitable was settling in, and I just wanted to beat the remaining crowds to the parking lot.

As I got in my Jeep I heard the announcer tell the faithful that Prince Fielder was coming up to bat. For those who don't know: Prince is the bulky Sounds first baseman and son of Detroit Tiger slugger Cecil Fielder. Prince is renowned for hitting a homerun at old Tiger Stadium at the age of 12 with a wooden bat, and from my seat behind home plate, I've seen him drive the ball not just over Greer Stadium's right field fence but completely out of ballpark and on to Chestnut Street a number of times this year.

So, as I turned out of the parking lot and headed down Chestnut Street behind right field, I slowed and pulled to the curb. I got this feeling that if there was any chance that I would see a homerun hit the street at the point of impact, Prince was my best chance. His big flies are mammoths. Woolly mammoths.

Sure enough, I saw the pitch delivered and I watched Prince pivot on his huge frame as the white streak left his bat. I lost sight of the ball's flight to the night, but I could tell the drive was way-back just by the awed sound of the cheering crowd. I saw kids inside the right field deck fence scrambling back in a futile attempt to get the ball if the yard held it. And then I waited for what seemed to be too many seconds for the ball to hit the car or fly in my window and hit me.

The ball left the yard alright. And I was right to be concerned for my own welfare. It hit Chestnut Street near the lane divider, hard enough to leave asphalt gouges in its hide. The ball bounced a few feet away from the Jeep and bounded past it into the Vanderbilt Press parking lot. I looked for anybody else around running for it, but I was the only person outside the stadium within two blocks of the impact crater. I jogged over (I could have walked had it not been for the adrenaline rush), picked up the ball, and congratulated myself for deciding to be in the right place at the right time.

I have seen the mighty Prince hit several from his launching pad. Now I can say that I know what his tattooed balls look like when they finally come down out of orbit and impact just a few feet away from me. Prince's big fly was my big thrill.
Posted by S-townMike at 7/18/2005 11:15:00 PM