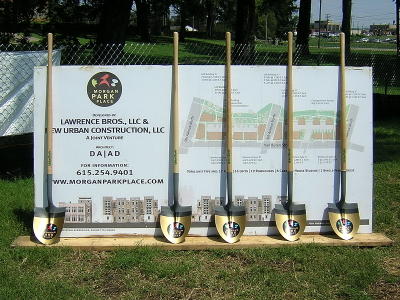 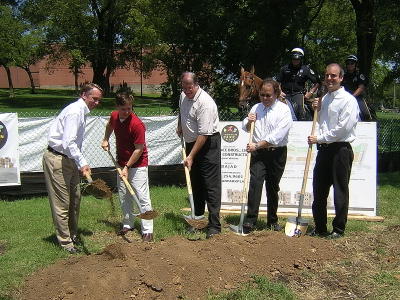 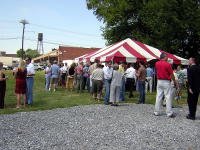 Government officials, private financiers, and other interested parties were in attendance.

Skip Lawrence (co-owner of Lawrence Brothers, speaking into the microphone in the picture below and to the left) welcomed the audience and went through a list of individuals present from Metro government, the Germantown Association, NES, Nashville Gas, Bell South, and other private companies who have contributed to the project. 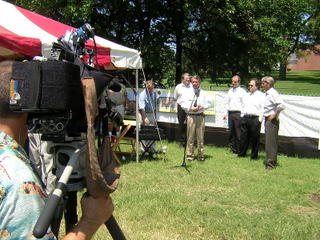 He also announced to the crowd that all of the poles suspending power and phone lines around the property--except for one--would disappear, because the lines were to be buried beneath the ground during construction, a point that received a hearty ovation. Mr. Lawrence also reported that Metro's Water Runoff Department had asked if they could use the project as a model for landscaping for the best water runoff. He said that Morgan Park Place is the culmination of 25 years of hard work by residents of the North End and builders, some of whom like himself lived within blocks of the construction site.

Mr. Lawrence invited Rick Bernhardt, Executive Director of the Metro Planning Department, to say a few words. Mr. Bernhardt (speaking into the microphone in the picture below and to the right) iterated that Morgan Park Place was both progress for the neighborhood and the culmination of community development extended even farther back in time that the 25 years that Germantown residents have been organizing to develop the North End. 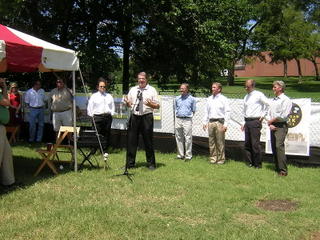 Remarkably, Mr. Bernhardt told the group that Morgan Park place was significant for both Germantown and Salemtown. I almost gave a hearty ovation to that statement, but instead I kept my hands at my sides self-consciously, not wanting to come across as partial and gauche.

After the ceremony, I went up to Mr. Bernhardt and thanked him for at least mentioning Salemtown to the gatherers. I told him that some of us in Salemtown sometimes feel like step-children in the North End. He told me that he understands and that he still has Metro Council members ask him, "Where's Salemtown?" I nodded without a vocal reply, but I imagined myself saying, "Well, you just keep telling Ludye Wallace that we're right here in his district and that one of these days he's going to have to remember us."
Posted by S-townMike at 7/29/2005 02:30:00 PM