I've referred several times since February to this market, on the corner of Garfield and 5th Ave., North, which is a perennial target for graffiti-spraying vandals, as you can see by the two pictures I took earlier this week.
While I was merely hoping that the new owners would spray paint over the graffiti before the week was out, little did I know that they had much more impressive designs for ridding the neighborhood of the inviting "Luv 'Ya Blue!" building (you have to remember the Houston Oilers manifestation of the Titans to understand "Luv 'Ya Blue!"), which was always just too tempting for the rascally lads toting red spray paint. 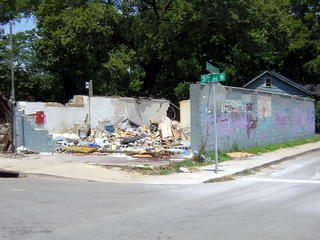 By the way, notice the back of the Stop sign in the picture above. Gangs had even sprayed it with red paint. While the sign guy was here this morning putting up our neighborhood watch signs, he also went around and covered up the gang graffiti on the traffic signs. Thanks, sign guy. 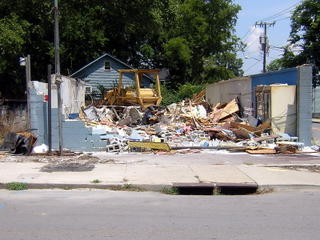 Looks like the lunch counter is closed. No soup for you. Next!