Salemtown Neighbors Has Done Its Part For "New Urbanism"

Reporter Bill Harless wrote an article, published in Monday's Nashville City Paper, on the increasing purchase that the philosophy of "New Urbanism" has with the Metro Planning Department and with Metro Council's recent legislation. New Urbanism is a late 20th century reaction to suburban sprawl, strip mall-dominated automobile culture, and the disappearance of pedestrian neighborhoods. Harless's article cites examples of New Urbanism in Nashville, including the Gateway Boulevard Urban Design Overlay near Rolling Mill Hill.

My first encounter with the New Urbanism of city planners here was at a Salemtown Neighbors meeting last spring during a discussion of Salemtown boundaries. There was some confusion about some of the neighborhood boundaries in the North End. One of the questions asked of the planner at the meeting was a query about what the historical boundaries of the neighborhood were. The planner responded that the boundaries that neighborhood associations make in the present are more important than historical boundaries of the past. That fits with one of the tenets of New Urbanism: formal associations govern and decide such matters. We came to a decision about boundaries and Planning accepted them.

However, the most significant action Salemtown Neighbors took to promote New Urbanism was to speak in favor of more restrictive zoning of the property in the picture below. 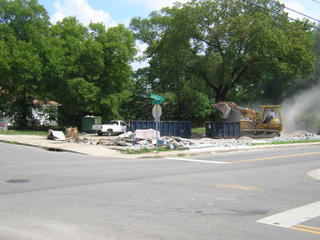 Regular readers might recognize the property as one of the most photographed on Enclave. It is the now vacant lot at the corner of 5th Ave. and Garfield where a convenience store used to sit.The new owner bought it a few months ago and plans to build something like the Germantown Building at 1200 5th Ave. where the Germantown Cafe is located.

As I tell it elsewhere, members of Salemtown Neighbors attended the Planning Committee meeting where the new owner was requesting a less restrictive zoning change; those members spoke in favor of the Planning Department's recommendation for a change to "MUN" zoning, which requires more restrictive "mainstreet" characteristics for new buildings, like bringing the building front up to the sidewalk, stressing vertical lines in urban architecture, and placing property parking behind buildings. It sounded exactly like what the owner was intending, so he did not dissent.

Whether or not we've known it at the time, Salemtown Neighbors has done its part to promote New Urbanism in the North End.
Posted by S-townMike at 7/27/2005 11:35:00 PM