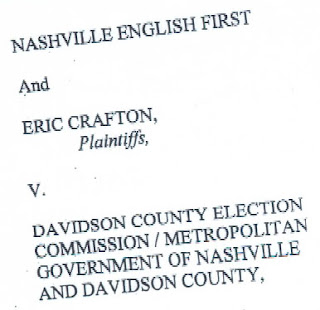 Bellevue Council Member Eric "English Only" Crafton is moving ahead with his threats to waste more of your tax dollars on a frivolous lawsuit. No amount is too high to burn for a sore loser. He's already gleefully warned that a lawsuit could cost up to $1 million.

Crafton is playing around with other people's money, which pretty much disqualifies him from criticizing "freeloaders who pick the pockets of taxpayers" as he has done in the past. And instead of questioning his fiscal irresponsibility, his anti-revenue friends at Taxing Tennessee are arguing that oil companies are the ones we've been waiting for.
Posted by S-townMike at 8/29/2008 07:39:00 AM

Email ThisBlogThis!Share to TwitterShare to FacebookShare to Pinterest
Labels: English Only, Nashville, Taxes