Spare No Taxpayer Expense for His English Obsession 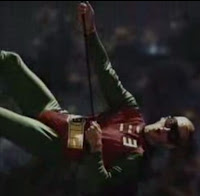 Eric Crafton, the Metro Council Member who once blew a gasket on the subject of xeroxing costs, is promising to burn more taxpayer money on English Only by taking Metro to court after the Election Commission voted to keep Crafton's effort to force Metro employees to speak English always and forever off the Nov. 4 ballot.

I wish some industrious English Only opponent on Metro Council would look into how much staff time and resources have been devoted across Metro departments to preparation, consideration, and review of English Only since Eric Crafton first started pursuing the idea in 2006. Now that Crafton intends to take the matter to court, we are told that costs could be as high as $500,000 to $1 million. How much longer are Nashvillians going to tolerate being held hostage to Crafton's costly obsession? Eric Crafton is fiscally irresponsible and wasteful, and somebody should turn off his money spigot or at least dock his council paycheck for these frivolous and self-serving expenses.
Posted by S-townMike at 8/27/2008 07:47:00 AM