Police Come Up with Effective Alternative to "Shoot First" 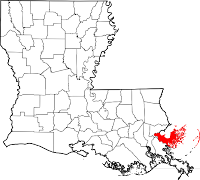 Back in 2005, I got labelled "pro-looter" by several local right-wing bloggers because I dared to deviate from their "shoot first and let God sort them out" idiocy during Katrina. The St. Bernard Parish Sheriff has come up with a creative alternative that avoids the hair trigger response and seems to separate the wheat from the chaff: he intends to send anyone caught looting to the state pen.

As soon as we announced we would be taking people to Angola, you could see the dirtbags starting to leave the parish," he said at a news conference this evening. "It was like somebody sprayed for roaches" ....

"Once you get up there, who knows when you'll get back," Stephens said. "There's a lot of paperwork involved, and the storm will probably set things back even farther."

Sounds fine with me, unless FEMA fails to do its job and fails to get water to survivors for 5 days again. Starving and thirsty people who steal food and water shouldn't be sent to prison for stealing food and water if the federal government does not step up to rescue them.
Posted by S-townMike at 8/31/2008 08:25:00 PM