When a neighborhood association's last non-Egyptian, non-Dutch online forum update was in September 2007, isn't it time to retool this online thing? 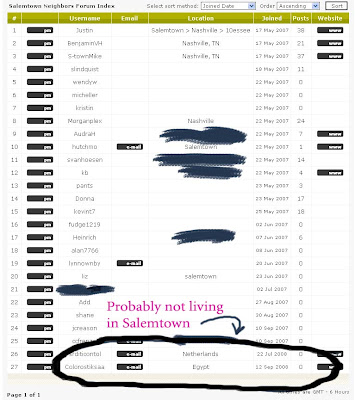 Never mind that the association by-laws stipulate that members must pay dues and either own property or live in Salemtown. It's bad enough there are still active members on this list who haven't paid dues in two years. Apparently, the Netherlands and Egypt are representin' without any requirement whatsoever.
I have nothing against globalism, but I would say it is time for Salemtown Neighbors to lay claim to a new autonomous website under its own control. Kick this one to the curb.
UPDATE:  Okay, I lied. I have a couple of things against globalism.
Posted by S-townMike at 2/20/2009 07:53:00 PM