Karl Dean & the National Day of Prayer: Ignorance of Their Lord is No Excuse 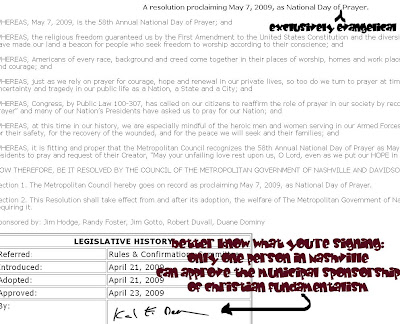 Happy National Day of Prayer (designed exclusively by, with, and for conservative evangelical Christians), everybody! Today's fanfare for the fundamentalist man will not only be observed by Mayor Karl Dean, but he sanctioned it by signing into law a resolution brought by a handful of Christian fundamentalists on the Metro Council (although it was adopted by the rest of the council, progressives and all, without debate).
It wasn't too long ago that Sheriff Daron Hall pleaded ignorance for speaking to a gathering with historic ties to white-supremacist groups, and now seemingly confronted with the news from the Tennessean that the National Day of Prayer is organized by a Christian-supremacist group (information he could have easily found anywhere)  the Mayor's Office mimics the Sheriff:

"The reality is that most prayer breakfasts are really Christian prayer breakfasts," [a local rabbi] said. "It's rare that non-Christians are invited to attend and even rarer are they asked to participate. If there is an attempt at inclusion, it generally stops at the stairway to the stage."

Janel Lacy, press secretary for the mayor, said Dean wasn't aware that today's downtown event was a Christian prayer service, but she said that the mayor often is asked to take part in religious events for specific faiths.

"Just this past weekend he attended a grand opening celebration for the Nashville International Academy, an Islamic school," she said in a statement. "Tomorrow, the mayor plans to speak about the importance of all kinds of faith in our community."

How many times are elected officials going to get a pass for plopping themselves right down into the middle of the culture war while using ignorance as an excuse for pandering to an extreme splinter of the electorate?
It is not too late for Karl Dean to bail on this ball. It seems to me that if he were truly concerned about the cultural wedge that the National Day of Prayer drives between even Christians (let alone people of other faiths and no faiths) he would skip this morning's worship of monochrome theocracy. Against any perception of better angels in the Mayor's nature, my guess is he has some electoral interest in holding down his right flank, and so he will show up to carry through with the farce that started with the signing of council's National Day of Prayer resolution.
Posted by S-townMike at 5/07/2009 07:26:00 AM