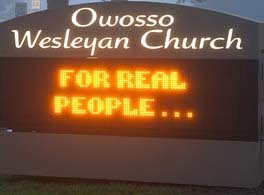 President of Woodlawn Area Neighborhood Association, Bell Lowe Newton, alerted me today that Council Member at-Large Charlie Tygard filed a new ordinance last Friday that would if passed allow commercial-style light-emitting diode signs into residential neighborhoods regardless of neighborhood density. Tygard's bid comes wrapped in the same sort of packaging he used a few years ago when he tried to pawn traffic-clogging car washes on neighborhoods with commercial-style elements like "monument-styles," setbacks, and limited sizes. He is even offering to limit the diode color to amber, which as can be seen in the church billboard above (as displayed exactly how it appears on a LED sign seller's website), is still obtrusively bright for low-commercial neighborhoods.

Bell is asking neighborhood leaders and community organizers to spread the word that the LED bill is up for first reading on May 19. Tygard's previous LED bill got initial support from Metro Council and the Metro Planning Commission but then ran into a monument-style brick wall after the Planning Commission reconsidered their support and recommended disapproval, buoyed by by broad public outcry. Bell says that she is not sure where CM Tygard's council and commission support will come from this time, but I would echo her point that it is not too early for concerned leaders and associations to contact the council members (including the at-Large ones) and express their opposition to putting commercial style billboards in residential neighborhoods. On a previous spot-zoning LED bill unrelated to Tygard's, District 19 CM Erica Gilmore told me in no uncertain terms by e-mail that she does not support "LED lights in residential areas."
CM Tygard's bill should be before the Planning Commission once again some time in June and is headed for July 7 public hearing.  That timing is right out of what blogger Carol McCullough calls the Suppressing Public Participation Chapter of the Developer's Playbook:

One of the most popular Council Meeting dates for [making public opposition inopportune] is the first one of the year that often falls one or two days after the new year holiday. Other good dates to avoid public scrutiny include those near the 4th of July, Thanksgiving and Christmas. If possible, create a sense of urgency that would make it seem that this timing is entirely accidental. A contract set to expire shortly after that date is one option.

Since Charlie Tygard is timing the public hearing to take advantage of a distracted opposition, neighborhood leaders should work that much harder to organize opposition to be there. The timing can be a double-edged sword: it should make a bigger impression if opponents refuse to let the holiday lure their eye off the ball on this issue. If the opposition is unable to muster forces because of vacations and family plans then neighborhood leaders should ask council members to defer the public hearing to a week suited to maximum high attendance.

Please pass word to your associations to contact elected officials and oppose the new LED bill.
Posted by S-townMike at 5/04/2009 10:18:00 PM