1st Saturday in May, Updated

While Nashville had its big spring event last weekend with the Country Music Marathon, our neighbor to the north, Louisville, is having its huge events this week at the Kentucky Derby Festival. I lived in Louisville (pronounced "Loo-ah-vull") for several years, and I can tell you that there is no week of events in Nashville that compares with Derby Week. I was in the Grand Stands of Churchill Downs in 1989, the year that Sunday Silence won the Kentucky Derby (pictured below), and I can attest to the claim that the Derby is "the most exciting two minutes in sports." 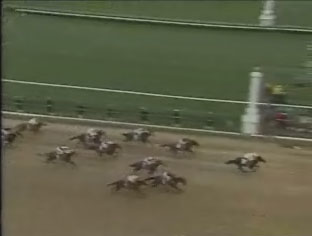 And the city of Louisville matches that excitement with a week long celebration with their own marathon, balloon race, parades, steamboat race, golf tournament, food offerings, and parties galore. (Louisville is also a city that preserved its older neighborhoods while Nashville tore its historic homes down during urban renewal, so one feels immersed in the tradition of Louisville pageantry that has been running now for 132 years).

Derby Week left such an impression on me that the first week of May means very little except a run-up to the "Run for the Roses" on Saturday afternoon. While I don't appreciate mint juleps as much as some, I've been sitting on our porch each evening this week getting prepared with my little sipping concoction of Makers Mark, lime club soda, and a splash of lemon juice (shaken with ice). And I'll be doing the same tomorrow evening (before the Sounds game), and a good part of Saturday up until the big race. Then I'll be singing "My Old Kentucky Home," with the crowd at Churchill Downs to celebrate the 1st Saturday in May.

Congrats to the horse that I think will be our next triple crown winner (that is, winner of the Derby, the Belmont, and the Preakness): Barbaro.
Posted by S-townMike at 5/04/2006 09:41:00 PM