On the heels of news that the Bush administration has obtained phone records from AT&T, Verizon, and BellSouth (otherwise known as "AT&T"), George W. Bush told a Mississippi audience yesterday, "We've not been ... trolling through the personal lives of millions of innocent Americans." But according to my dictionary, "trolling" includes "to patrol ... in search for someone or something."

Hence, the Bush administration has indeed been trolling through innocent people's phone records using an ends-justifies-means rationale without sanction from a judge to do so. 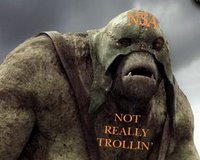 To make matters worse, the branch of govern-ment closest to millions of innocent Americans, charged with defending the rights of the same, has done nothing to check or balance the Bush administra-tion's end-around the Constitution: Congress has either sat on its hands or rubber stamped or defended the President against the best interests of the American people. Even Tennessee Senator Bill Frist shielded Bush from criticism, saying, "I strongly agree with the president of the United States that our ultimate responsibility is the safety and security of the American people." Of course, why would we expect any better from the same Tennessee Senator who accused a fellow Senator of giving comfort to terrorists for arguing that the President is not obeying the rule of law. 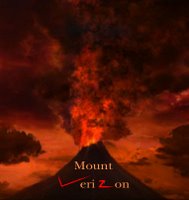 Kudos to Republican Senator Arlen Specter (PA), who says that he intends to summon officers from AT&T, Verizon, and BellSouth (otherwise known as AT&T) to testify before Congress. According to reports, the Bush administration is cronied up with AT&T's Senior VP and with Verizon's General Counsel. And cronyism tends to signal abuse.

I called our residential phone carrier, BellSouth (otherwise known as "AT&T") this morning in order to request a list of our phone records that were either strong-armed or willingly turned over to the government during the dragnet of innocents. As I was waiting for someone to pick up, I got that recorded message that my call would be recorded "for quality assurance and training purposes." And I couldn't resist adding under my breath, "or for the President to troll in case you don't stay in your place, peon." The living BellSouth representative who picked up told me that our records could probably not be obtained by me without a subpoena. I told her that I understood, but that I still wanted to make the request to the appropriate BellSouth office. She gave me the address (Administrator-Subpoena Compliant, P.O. Box 54407, Atlanta, GA, 30308), and I intend to follow up. I also contacted Qwest, the lone carrier that did not turn over customer phone records to the government, in order to inquire about switching to their service. However, they told me that they only provided long distance service in Tennessee. If they offered residential service here, we would definitely bail on our newest big brother, BellSouth (otherwise known as "AT&T").
Posted by S-townMike at 5/12/2006 02:30:00 PM