I attended today's third public forum on the new Sounds ballpark at the Downtown Library. I can honestly say that I left (after an hour) feeling even better about supporting the ballpark initiative than I did before. There are a lot of unique qualities that this ballpark is going to have that aren't the case with so many others, especially the major league parks.

One of the qualities--mentioned by the Sounds official co-presiding over the meeting--was that this ballpark will be built exactly in the fashion that the classic ballparks where: squeezed and shaped to fit an unusual city scape without altering easements or simply creating faux impressions of "throw-back" elements for which there is no reason. For instance, a huge rock-outcropping sits at the lower end of the river bluff beyond what will be the right field corner at the base of the Gateway Bridge. Hence, unlike Angel Stadium at Anaheim, which created a faux rock outcropping in center field, builders of the new Sounds ballpark don't have to create an impression of urban bluffs. And thankfully, they are not removing the outcropping, but incorporating it into the structure of the field and Downtown Greenway itself. According to the speakers, the bluff will afford the best view of Downtown (illustrated in the second picture below) while one watches a game.

Another element unique to this ball park will be the ability of ticketholders to enter at any of the four entrances wrapping around the front facing 1st Avenue and Gateway Boulevard and do so at the same grade level as their seats. This is because the field of play will be sunken 8 to 12 feet below ground level and the grade of the property slopes up from the corner of Demonbreun and 1st to the corner of 1st and Gateway Boulevard, and then slopes up further from the corner of Gateway Boulevard up to the Gateway Bridge. So no matter whether your seats are in the lower bowl or the upper bowl, you can go in an entrance at the same level your seats are without having to take stairs, ramps, or elevators external to the bowl to move down or up. Architecturally, that would seem to me to give the park a snug profile, too. 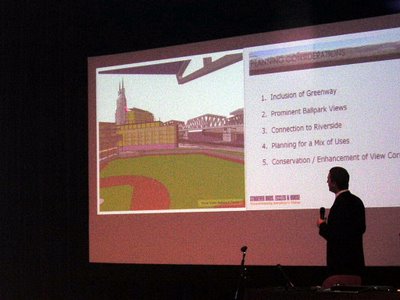 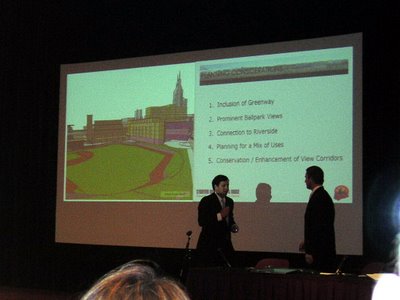 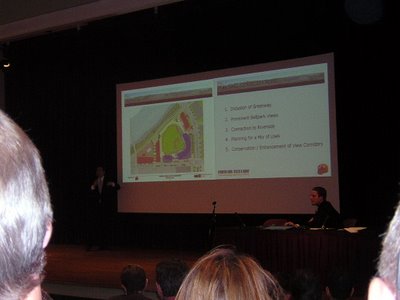 The Downtown Greenway will be extended from Riverfront Park up the river along the railroad line and up Rolling Mill Hill. Part of that greenway will from a 12-foot-wide concourse between right field and the river. Since the field will be sunken, there will be no outfield wall to obstruct the line of sight from that concourse. Pedestrians and picnickers on the greenway will be able to view the games unobstructed and with the river at their backs. Unlike Minute Maid Park in Houston, which harkens to its connections with their downtown train station by hoisting an old train engine on some faux tracks suspended above left field, the crowds at Sounds games will be able to watch a real train, the Music City Star, as it departs from and arrives at the new train station at Riverfront Park, again because the field is sunken and there is no wall obstructing the view of the tracks. The left field concourse--cutting from 1st to the greenway--will remain open even on non-game days so that pedestrians can either access the greenway or stop at one of the cafes that will line the leftfield boundary of the ballpark. Also, Demonbreun will be extended from 1st toward the river and a plaza will be built at the boundary of the greenway.