Charlie Tygard Gives His Reasons for Voting for Kay Brooks

District 35 Council member Charlie Tygard explained his vote for Kay Brooks in a publication called the Westview. I reproduced a portion of it here (the several spelling and grammatical errors were in the original text): 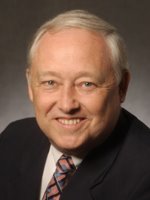 Such as been written or spoken about the Metro Council's decision to fill the vacant 5th District School Board position for 90 days with a lady who chooses to home-school her 4 children. I have responded to several citizens inquiries as to why I voted in the majority for Ms. Kay Brooks? The simple answer is that she was the only one of the 4 announced candidates who took the time to track me down, ask me for my thoughts on education in the 35th district, explain why she wanted the position and ask me for my vote. Her initiative and willingness to think "outside the box" was impressive. She earned my vote.

His reasoning is consistent with the patronage expectations that I criticized Ed Whitmore for earlier. Rather than finding out more about the candidates--like, for instance, by attending the District 5 candidates forum--these Councilmen seem to be waiting for the candidates to come and kiss the ring.
Posted by S-townMike at 5/25/2006 11:43:00 PM