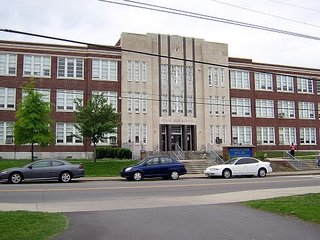 Say what you will about the methodology of the rankings, this is a proud moment for one of our neighbor-hood high schools and it should be motivation for Nashvillians to find a way to adequately fund our schools and get more of them into the top 100 elite. MLK has a unique milieu where 7th through 12th graders all attend classes in the same building. According to some, this has lead to MLK being a perennial target of the Metro Nashville School Board. I don't know why board members would mess with something that's obviously working.

While MLK--a magnet college-prep school--is one of the crown jewels in north-by-northwest Nashville, it resides in a troubled and highly transitional, if not blighted neighborhood, which will hopefully change with the new developments on the John Henry Hale site. Watkins Park, which sits across 17th Av. from MLK, is clean and has attractive facilities, but there are many run-down buildings and markets near MLK and Watkins Park that seem like nests for hoodlums. 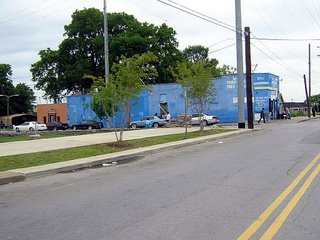 I drive by one of the markets on a near-daily basis and I often see drug deals going down and rough-looking characters hanging out and drinking by the market (the more troublesome markets around north-by-northwest Nashville seem to all be painted that powder-Titans-blue). There is also no shortage of gang-related graffiti, which is another trademark of these markets.