Coming Out Party for Dozier and Partisan Coffee

Compared to his rather suspicious previous report on Mayoral candidate David Briley "posturing" on the environmental issues, City Paper reporter Bill Harless practically bragged this morning on relatively conservative Buck Dozier's publicized public safety platform. According to Harless a "ready and willing" and "thorough" Dozier "unveiled" and "laid out a comprehensive" platform. Harless made Dozier look good even at the prospect of criticism of a 2000 audit of Dozier's performance as Fire Marshall. 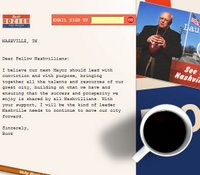 Could it be because Buck Dozier seems to be an undefiled black coffee man vs. the latte-liberal overtones "Rex" made recently ("Battle of Bongo Java") in questioning Briley for hiring strategists who previously worked for so-called "Republican-lite" campaigns?
Posted by S-townMike at 3/09/2007 06:53:00 AM