"Beautiful View" Is Not Looking So Beautiful to Some in Salemtown 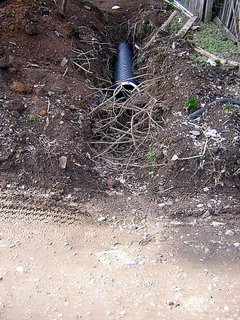 A low visibility conflict has been brewing lately among some property owners in Salemtown over a large drainage pipe installed at a new townhouse development at 6th Avenue & Hume Street called Schoene Ansicht (German for "Beautiful View"). The drain pipe would funnel rainwater run-off into the alley between 5th and 6th Avenues and possibly onto the low-lying property of neighbors who reside across the alley from the development.

According to e-mail correspondence between a Metro Storm Water Engineer and a representative of Dale and Associates, the SP zoning of the site did not deal with stormwater run-off at all. However, the property itself has been converted from one that held a small duplex hugging the corner surrounded by mostly permeable greenspace to a high density footprint covering the entire property and offering paved parking. 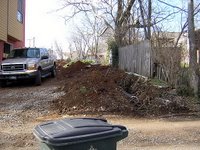 Nearly all of the prior greenspace is gone. So, water from the re-developed property is to drain into retention tanks and overflow though a single pipeline into the alley.

This presents a problem for next-door neighbors whose property sits several feet lower than the alley. I stood in the neighbors' yard to take a picture and from where I stood the pipe seemed to hit me at eye level. 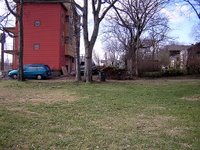 In his e-mail the Metro Engineer who also visited the site told Dale and Associates that he is concerned for the adjacent property and thinks that even when the alley is paved, the pavement "inversion" will not be enough to divert the run-off to the street.

Dale and Associates told the Engineer that Public Works would not allow them to run the pipe to the street because of a sidewalk, and so they maintain that they had no other choice. They are advocating a high crown in the alley to divert water to Hume Street. But that would present another problem for the adjacent property. The corner of 5th and Hume is where the water would run. 5th and Hume is one of those water run-off problem areas that Metro Water promised to solve a long time ago, but has not done so. 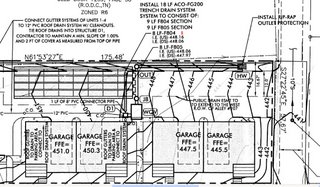 So, even if the run-off from 6th and Hume is diverted down the alley to Hume, it will eventually add to the post-storm ponding in the adjacent neighbors' front yard instead of their back yard.

To further heighten tensions in the neighborhood, co-owners of the development seemed to send mixed messages to concerned neighbors about the project. One co-owner told neighbors that the pipe would empty right into the alley where it currently comes out. Recently, I sent an e-mail to another co-owner with the text:

I noticed that on your 6th and Hume development you are running what looks like a drainage pipe along the property line to the alley. Will that carry water run-off into the alley or are you planning to connect the pipe to the street run-off?

I received this response:

It'll be connected underground. This was a requirement by Metro Water's Storm Water division. All of that special stuff for that underground water retension system cost $117k installed. Not to mention the amount of time it takes to custom make pieces to fit our small project.

That response does not indicate that the water would run into the alley, even though it is very clear from other sources that the water will not connect to the street run-off or underground to the storm sewers. That mixed message generated confusion--with some charging Schoene Ansicht co-owners with deception--at our last Salemtown Neighbors meeting when we discussed the pipe. The co-owners used to attend those meetings, but have stopped doing so.

Salemtown Neighbors has been very supportive of this development from the beginning. We gave approval to this and other projects so that they could get Metro Council authorization to build. I even wrote a letter on their behalf to the Planning Commission supporting their plans. However, there are increasing concerns among some members, especially affected residents, that co-owners and developers of Schoene Ansicht are not doing what they should to mitigate water run-off problems that could adversely affect some of those who have supported them in the past.


UPDATE: Schoene Ansicht Co-owner Steve Yokley responds in the comments section of this post that he mistakenly assumed that the drainage plans on this development and another they are going to start in the future were the same when he replied to me in the e-mail I quote above:

The Salem Garden project at the corner of 6th and Garfield, was slated to discharge underground. I assumed that this project would be done the same way.