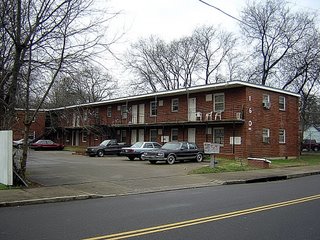 The sounds of two or three rounds of semi-automatic gunfire peppered 4th Avenue in Salemtown last night just before 10:00. We heard the shots from our house, and like several others we immediately called the police, who showed up in several crusiers in a matter of minutes.

Neighbors who witnessed the shooting told police that a late 80s/early 90s dark colored Honda sedan (4 door) fired shots at a mid-90s Thunderbird in the parking lot of an apartment complex (pictured above) at 1609 4th Av., N. Reportedly, the shooters sent a couple of volleys into the complex from the alley between 4th and 5th and then drove around to 4th and shot into the complex's front-side driveway from the street. Witnesses say that a number of cars were hit by bullets. No person was hit. Police say this morning that they have no suspects in the shooting.

The apartment complex, which is near Morgan Park, already has a rough reputation for being a rumored center for drug sales. 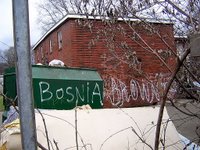 Also, the apartment building stays covered with the graffiti of the predominately Mexican "Brown Pride" gang. The complex, which according to Metro records is owned by Iunian and Doina Gherghescu of Old Hickory, TN, has been allowed to fall into a shabby, almost blighted appearance to match the criminal activity that goes on there. Along with the Shiloh Apartments just a few feet away, this complex is a liability to our neighborhood, and it is now attracting criminal activities that endanger its neighbors.