Counting Her Chickens Before They Hatch?

Vice Mayor Candidate Diane Neighbor's letterhead lacks a preposition between her surname and her prospective title: 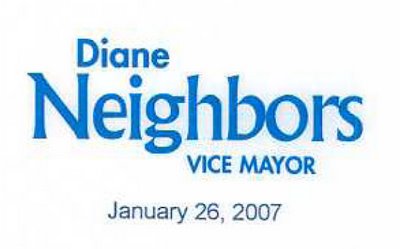 I have to say that I was firmly neutral on Council at-Large Diane Neighbors until this whole car wash exemption dust-up, but now I am dead set on not voting for her for (which happens to be the missing preposition) Vice Mayor in the fall.

And I don't care how many times she tries to spin her surname into a neighborhoods talking point this time. I fell for that and voted for her last time. But actions speak louder than words. And her constant repetition of faulty justifications for an anti-democratic initiative regardless of the flack she catches from constituents is approaching Bushian proportions. The parroted rationalizations are looking more like mantras of expedience every day.

The more she pitches her campaign as "Neighbors and Friends," the more I am reminded that it should be called "Neighbors and Special Business Interests." And while she may deny now that the car wash developer's previous campaign contribution had an effect on her support for the bill, we need to remember that there are seven months between February 6 (when the Council will most likely pass the car wash exemption) and election day. That leaves plenty of time for the lobbyists--fresh with disposable car wash income--to reward her campaign later for shepherding the exemption into law now. We need to remember that she has not pledged not to accept their campaign contributions in the future.

So, unlike other local progressives (who might hold their noses and vote for her just to oppose a social conservative) I do not agree that putting Diane Neighbors on the fast track to local political stardom is our best option. Whether it throws a wrench into the fine tuning or not, I must say that conscience will not let me trust a local politician who styles herself progressive and democratic but then does her actual business with business. I trust that candidate less than I do a somewhat mediocre social conservative who stands less of a chance being fast-tracked in a Democratic stronghold. I won't vote for the latter, but I would also caution others to the real hazards of voting for the former.